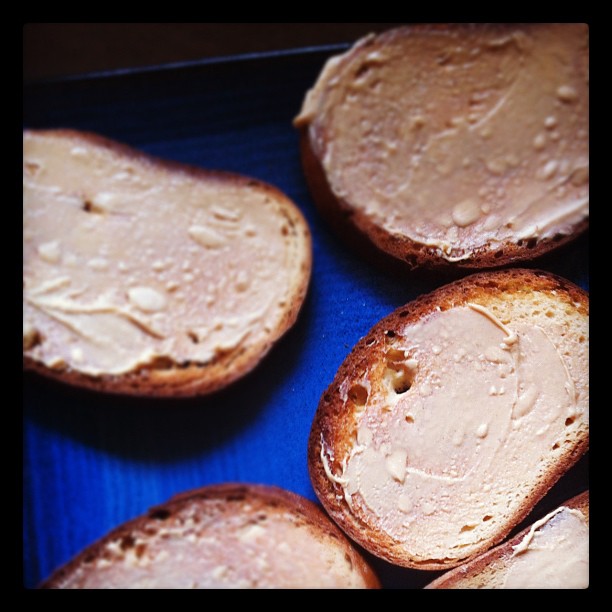 I have a confession to make. My kid has a peanut allergy and I (sometimes) eat peanut butter.

You see, when I was a little kid, my favourite kind of sandwich was peanut butter and honey on brown. Rarely did a breakfast go by when I wouldn’t have that same winning combination of spreads on delicious warm toast.

Of course I’d eventually go on to embrace other kinds of sandwiches, like the mile-high shrimp, avocado and cream cheese beauties I’d split with my mom after my orthodontist appointments. But I still loved peanut butter and faithfully consumed it at least once a day. At least I can be thankful that my son doesn’t have other other allergies like an avocado allergy.

Knowing peanuts are a common allergen, I delayed letting my first-born son try any peanut products until after he turned two. I was working as an editor at Today’s Parent magazine at the time, so I was up on that stuff, as I am now. However, that waiting period ended one day when my toddler asked for a bite of my peanut butter toast. Figuring we were out of the woods, I let him take a nibble. And then he puked.

I didn’t panic. Figuring kids sometimes have one-off vomiting incidents when nothing is really wrong (too much cake and pizza at a birthday party, for instance), I simply mentioned it at our next doctor’s appointment. Our physician agreed the one occurrence wasn’t enough to go on. I think we booked the allergist appointment at that time but that it was some months before we could get in. In the meantime, another parent gave him what she thought were Halloween-coloured Smarties (from a bulk store), but what were really Reese’s Pieces. He threw up again. Our hearts sank. One could have been a coincidence but two such incidents were very likely not. A scratch test confirmed our suspicion and soon all peanut products were banished from our house. Toast with peanut butter would become a thing of the past.

But I miss it. While my son has, most fortunately, never had an anaphylactic reaction, we operate as if any exposure he has could lead to an escalating, or even life threatening, incident the next time. He wears an EpiPen around his waist and we carry extras when we travel. His allergy mugshot is featured in those compulsory posters teachers wisely put up in classrooms and at daycare. We read labels and avoid foods that “may contain” trace elements of peanuts, even though in most cases those caveats are there to release the manufacturers from any liability that could stem from not suggesting otherwise, regardless of whether a peanut has ever darkened the factory door.

My son has never had an allergic reaction from a smear of peanut butter on a playmate’s hand, but I don’t risk exposing him myself by, say, eating a peanut butter bagel at work and then kissing him when I get home. I’ve easily gone a year at a time without touching the stuff.

But in the last couple of years, when I’ve been travelling outside of my province or (ideally) my country, I’ve been indulging in increasingly unabashed peanut butter pig outs. I ate peanut butter at my mom’s place in Vancouver while visiting there without the kids. And again on a work trip (well, a work ski trip) to Colorado (hey, I needed protein to adjust to the altitude). When I went on a foodie-themed tour of Montreal, where our group was I was fed by celebrated chefs—swear to God—the sensory highlight was the perfect brown toast with peanut butter and honey I had at breakfast before a long day of eating began.

You see peanut butter has become a kind of forbidden fruit for me as an allergy mom. As a result, this humble condiment has been elevated to rare delicacy.

I know there are other parents of kids with peanut allergies who would be horrified to learn that I ever let the stuff pass my lips. I can understand perfectly that point of view, especially for those who have witnessed the horror of a throat-closing anaphylactic reaction from the tiniest trace of peanut butter on a knife or (worse) miniscule particle in the air. I would have no trouble at all forever renouncing the stuff if my child had been in a life-threatening situation because of his allergy.

I know that allergic reactions can worsen with subsequent exposures (though research into controlled desensitization is showing promise), and that they can do so without warning. But I also think that I’m going to wash my face and hands dozens of times between eating peanut butter on a trip without my kid (or in a cafe while he’s away at camp for two weeks) and planting a kiss on his cheek (if he’ll let me).

I also believe strongly in evaluating risk logically and implementing safety measures with corresponding proportion. Hence, I’m much more concerned about my child’s safety crossing the street or around swimming pools than I am about the peanut butter I eat 48 hours before I see him again.

What do you think? Am I, um, nuts? I’d love to hear your thoughts in the comments.