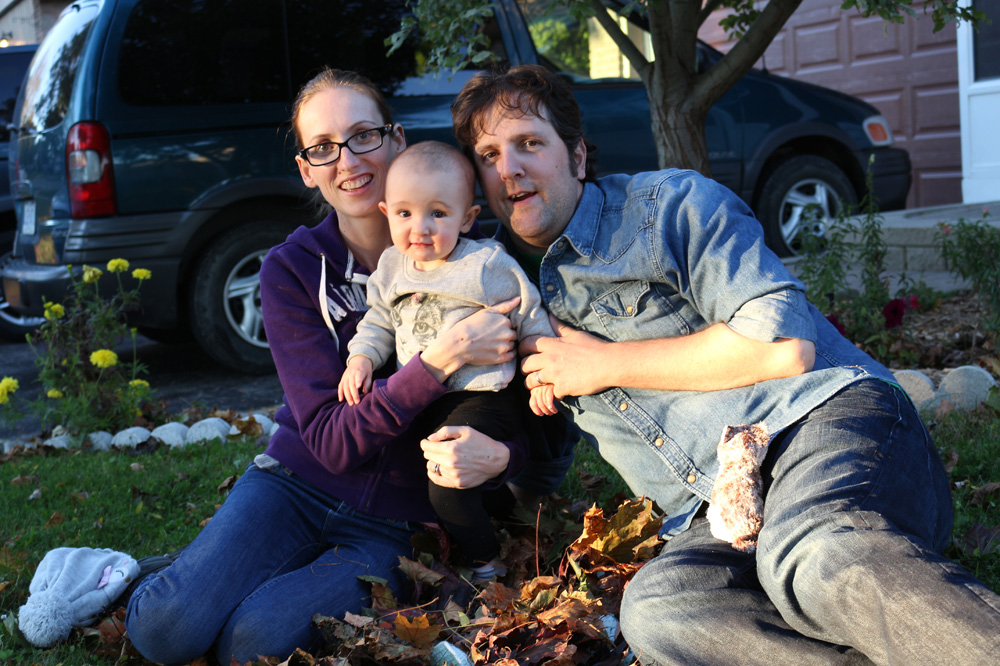 What makes this man’s family unique is that he lived to see this day. After nearly dying at age 16 and overcoming various health challenges since then, fatherhood is pretty sweet.

I spent the previous night covering the municipal election in Toronto. Outside of the journalism-related reasons, my 10-month-old daughter has provided the other speed bumps on a restless night. She hasn’t gotten used to sleeping in her crib.

Sometimes, when I’m in a self-reflective mood-you know, the ones where you wonder how the hell you got to your current destination in life-I can’t help but feel that moist band sliding under my eyelids and reaching for the corners of my eyes.

Tear ducts-they tell the truth, even when you don’t want to be seen as maudlin.

As a man who grew up in a blue collar household where there wasn’t a lot of emotion shown-well, not to a sappy degree-I’m sometimes surprised by my emotions when I look at my daughter, Emily, and tear up.

Being a parent was something that both my parents and I did not expect would happen for me. My mom even admitted so much to me when my daughter was born. The reason: I almost died from encephalitis at 16.

My lungs eventually started to fill with fluid, resulting in vericella pneumonia. That infection eventually got into my spine and travelled to my brain, hence the encephalitis.

I can’t remember the nurse’s full name, but one night, when Sharon was making the rounds at Oshawa General Hospital, she came to my room and noticed I had stopped breathing. My heart hadn’t stopped, but I was in a bit of trouble. I was put into a drug-induced coma for three days, transported to Sick Kids Hospital in Toronto and spent three weeks recovering.

What transpired was my diagnosis of common variable immune deficiency. My compromised immune system got its ass kicked by a childhood illness.

There was concern from the doctors that I may have suffered some brain damage from the swelling of the encephalon layer. But, I came out of the coma with only one abrasion on my brain, resulting in a future epilepsy diagnosis after I suffered two grand mals in May 1998. Being referred to a neurosurgeon in these instances is an important part of getting the best diagnosis for your condition, that is why neurosurgeons like dr timothy steel as well as his fellow colleagues are trained to see how this can affect people and on what scale, so my diagnosis looked to be one that was going to stay with me.

I’ve had other health problems-mostly blood-related-and they’ve all threatened mortality to a degree. Hemolytic anemia, idiopathic thrombocytopenic purpura and aplastic anemia, which I’ve been in remission from since September, 2010. People with my condition are also known to have a higher risk of leukemia.

Now, coming back to the present, when my wife and I discovered she was pregnant, my first concern was would our child get saddled with the same health issues I have.

We went through all the questioning, but most of the doctors and counsellors agreed that my condition was not genetic.

Then of course came the moment of Emily’s birth, which made me well up-not cry, mind you, but my vision was obscured by the glistening discharge that coated my eyes.

We have a pretty traditional, nuclear family, but my path here is one I have fought for.

I see that fighting spirit slowly manifest itself in Emily. And it makes me smile.

This is #1000families post number 38. Do you have a family story of your own to contribute to the 1,000 Families Project? Or do you know a family that might want to do so? Learn more about how the series got started and how to get involved here. You can find all of the #1000families posts here.

Brian has spent 11 years honing his sports and entertainment journalism with various media outlets like Urban Male Magazine, Sun Media and the Town Crier. He's recently stepped away from the job full-time to go back to school for public relations and work construction, but still writes a pop culture column, The Blast Radius, and entertainment features for the Town Crier. View all posts by Brian Baker