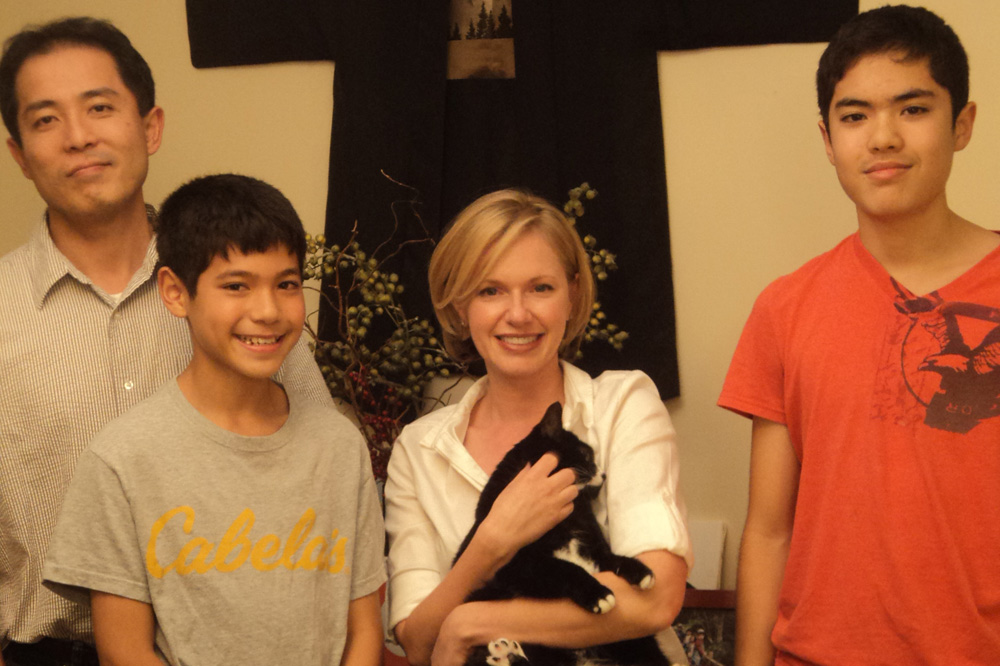 We became a family in Japan.

It was just the two of us at first, Masaya and I, rounded out with a couple of cats in a small one-bedroom in Tokyo. In time we had kids and we stayed in Japan until the boys were more than old enough to start school. When we relocated to Canada, Ryo was almost six and a half and Aiden almost three.

It was important to us to foster bilingualism and a bicultural identity in our kids from the beginning: our boys are Canadian through me and Japanese through their Dad. But we’ve learned that providing opportunities for them to embrace both cultures doesn’t happen consistently or constantly, rather in fits and bursts through time. We make the most of environment and circumstances. Looking back on those early years, I could say my language was their “mother tongue” for only a very short time, if at all. While I spoke to them only in English, they naturally adopted the language, customs and habits of our community: Japanese preschool, daycare and neighbourly visits meant my oldest son identified primarily as Japanese.

To balance things out, we often met with other English-speaking families that I met through the Association of Foreign Wives of Japanese (AFWJ). I took the boys on yearly trips home to Nova Scotia, where they became close to their Canadian relatives. Their English would flourish again after those long summer visits.

Since relocating to Canada eight years ago, though, the tide’s shifted and we’ve had to find ways to keep the boys actively engaged with their Japanese heritage. Japanese friends in our new Canadian city have become a second family, providing much-needed access to the language in a natural environment. Saturday morning Japanese school and Masaya’s diligence in teaching kanji, the formal Japanese writing system based on Chinese characters, has helped, too. Masaya speaks to the boys in Japanese, and YouTube makes it easy for him to share his favourite childhood TV shows and music with them.

Though we haven’t been back in a long time, they are keen participants, observers and practitioners of all things Nihon. It’s evident in their body language and mannerisms, in the way they switch from using English with me to Japanese with Masaya and our adult Japanese friends. Barring visits back to “the homeland,” we feel we’ve provided them with as much exposure to Japan from afar as we can. It’s worked so well, in fact, that within our four walls it can almost feel like we’re still there. But at school, with their friends, and with me, of course, they are fully engaged in their Canadian, mostly English-speaking world.

They’re getting older, and with a long visit planned to Japan in the upcoming year, they’ll have a chance to re-identify with their native land. I know as they approach adulthood they’ll choose their own path to self-identity. But for now, it feels good to know they’ve been given a chance to experience both.

This is #1000families post number 24. Do you have a family story of your own to contribute to the 1,000 Families Project? Or do you know a family that might want to do so? Learn more about how the series got started and how to get involved here. You can find all of the #1000families posts here.

Cindy Graham is a recent graduate of the Algonquin College Professional Writing program, where she blogged about life as a mom in Japan and the experience of coming home to Canada after her extended time abroad. She enjoys exploring issues affecting Canadian families and being a mom to her two growing boys and their unpredictably adorable cranky cat in Ottawa. View all posts by Cindy Graham