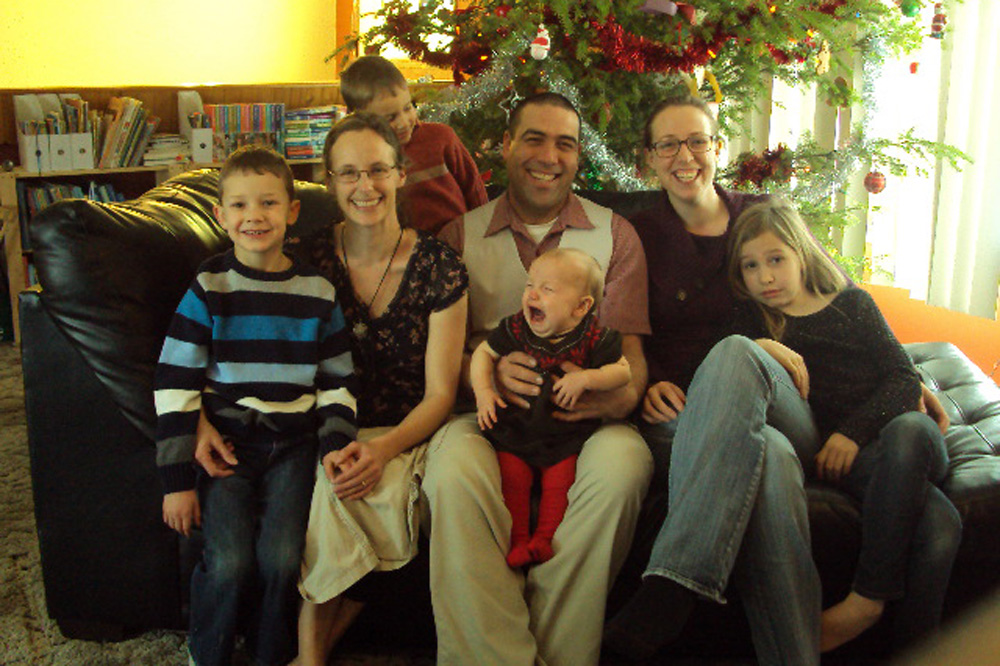 This is my family. We are the McLeod/Hinders and we are polyamorous. That means that there are three of us adults in one relationship and we raise our families together as one. From left to right, we have Silas (7), Mom #1 Robyn, Oliver (5), Scott, Meredith (1.5), Mom #2 Natalie and Isabella (8).

We took this picture just a few days after we moved in together at the end of last year. We live on a large ranch and Robyn home schools our kids, while I work from home as a transcriptionist. It has been a pretty crazy, hectic, amazing past nine months but life is pretty darn wonderful.

I was a single mom for the last seven years, raising my almost eight-year-old daughter, Isabella. During my college years I studied sociology and anthropology and was intrigued with the mosaic of different relationship styles that worked around the world and throughout history.

After my bestfriend had some luck on an online dating site, he encouraged me to try it out. After several months of trying, giving up, and then deciding to give it one more try, I received a message from Scott. He explained to me that he was happily married and looking for some interesting people to connect with. However, it didn’t take us very long to realize that we had a connection that ran deeper.

Scott and Robyn have known each other since they were young kids. They went to school together, their parents went to school together—typical small town fairytale. They started dating when they were 14 and 15 and have been married for almost 10 years. During that time, they adopted a daughter, Tawny, who has since graduated and struck out on her own (unfortunately not in the picture), and had three children of their own, Silas, Oliver and Meredith.

Late this last summer, we agreed that the distance was no longer bearable for any of us, so we decided to merge our families. We moved in together December 29th.

Scott is a rancher and therefore works from home running cattle, as well as sheep, horses and dogs. He is a fairly busy guy. Robyn is a stay-at-home mom who home schools our three school-aged children, as well as takes care of the daily running of the house. Isabella was in public school, French immersion, up until the move, however she was struggling. She started learning in English in January and the improvement has been remarkable. We live quite a distance from town so I took up distance schooling to become a medical transcriptionist, which allows me to work from home as well.

Our kids have had some adjustments, Isabella especially. She has never had to share me and my attentions before. Scott and Robyn’s children have had to adjust with having a new sibling with very much an “only child” attitude, as well as having another parent-figure in the house.

Also coming from the “big city” of Kelowna, B.C., to an hour outside or rural Quesnel, B.C. has been a major adjustment. Albeit, hilarious at times. I started a blog monogamyisformanhattan.blogspot.ca, in order to share some of my funnier experiences with my city slicker friends and family.

A typical day starts with school, for both the kids and me, while Scott goes out to tend to the animals. During the warmer months, the kids eat lunch out on the deck, and then they enjoy a few hours of unstructured outside time (with several hundred acres as our backyard!). The afternoon is spent with science or project time, then while parents make dinner, they get an hour or so of “screen time” where they are finally allowed to watch some T.V.

Tuesday is art class in town, Thursday is piano and gymnastics. Sunday is family movie night with popcorn. It’s all really quite boringly normal.

Natalie Hinder is a medical transcriptionist and mom living outside Quesnel, British Columbia. She writes a blog on polyamory and rural life. View all posts by Natalie Hinder