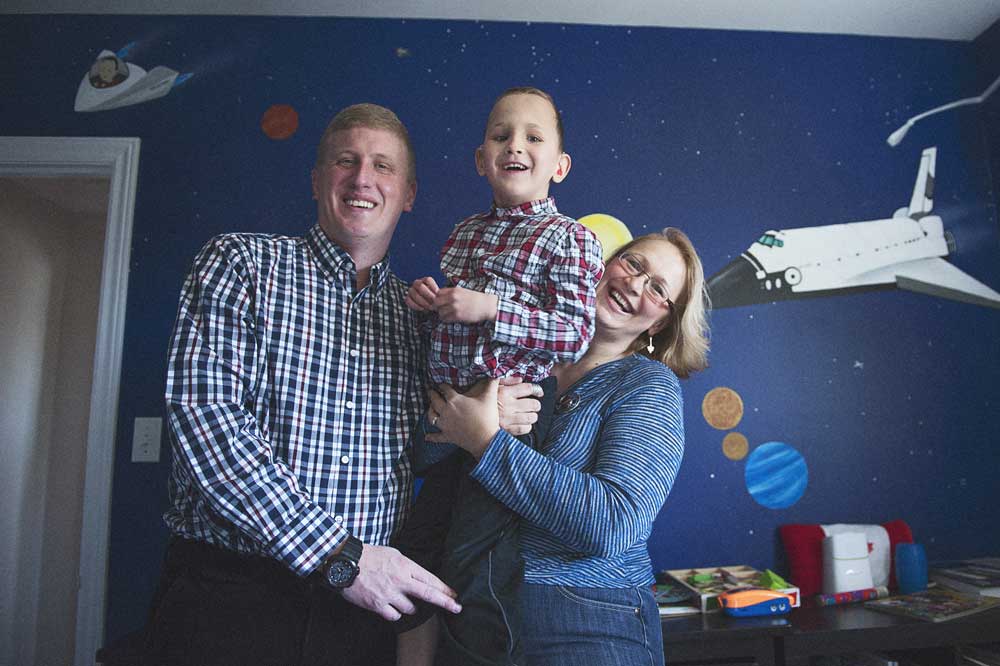 When Lesley Donaldson-Reid’s son was born at 26 weeks and 6 days gestation, he weighed less than a jar of peanut butter. Her book Growing a Rainbow: The Premature Journey of a Two Pound Hero will be released November 17 on World Prematurity Day .

I knew I wanted to be married in a castle before I found the man I’d call my husband. I didn’t know he lived in another country. Nor did I realize that in meeting him randomly over the internet, I’d find the best partner for the worst time of my life.

My husband, Bruce, is Scottish. We married in Fraser Castle (the one featured in the movie The Queen with Helen Mirren) in 2005. We didn’t live on the same continent until a month after our wedding. In 2007, after employing the assistance of a fertility clinic, I became pregnant with what I hoped was the first of three children.

From the moment I heard the nurse say, “You’re pregnant,” I fantasized about my children’s future. Blue eyed, like us, they’d have Daddy’s tall bones and my zaniness. Any combination of boys or girls would have suited us. Bruce and I would settle their arguments over breakfast, and have pillow fights with the kids at bedtime.

Six weeks into my pregnancy, I started spotting. At nine weeks, I went on sick leave with hemorrhaging. At nineteen weeks, my water broke. Two obstetricians told me that I should consider terminating my pregnancy. My dream was shattered.

I had oligohydramnios, a lack of amniotic fluid. When there’s no fluid that early in the pregnancy, the outcomes for the fetus are very poor. I was a broken woman with a broken heart and a broken uterus. But I’d felt my baby move days beforehand, and I couldn’t take his life away.

Bruce and I moved forward with my pregnancy knowing that on any given day we could lose our child. I was admitted to hospital on Ontario’s first Family Day in 2008. My son was born before my third trimester started, at 26 weeks and 6 days of gestation.

My micro-preemie son, Torran, weighed less than a jar of peanut butter. I wasn’t able to hold him, or kiss him. My hands bled from frequent hand washing before each time I touched him with my fingertips. On more than one occasion, the doctors asked us if we wanted to remove the tube in his nose which was attached to a breathing machine. March 15th, we sat beside his grey, tiny body asking him not to die as he fought against a life-threatening infection.

He spent eight weeks in that plastic box, attached to the ventilator. For four and a half months, Bruce and I watched our son struggle for each infinitesimally small step towards coming home. Sometimes it seemed as though he’d never get there. Doctors diagnosed him with several of the perinatal complications related to prematurity, including bleeding in his head which lead to hydrocephalus (retention of fluid in his brain). He had only just reached the age of a full term infant when he had his first brain surgery.

We chose to be a family with a disabled child. His diagnoses don’t define him or his future. Torran’s a delightful boy, despite his medical and developmental issues. He worked hard to achieve each of his milestones and he still has a long way to go. My body can’t give Torran any siblings, and for that I still feel broken. Torran’s personality helps heal my heart. Each day I’m thankful that Bruce and I clung to our hope that our son would thrive and prove the doctors wrong. That’s why I wrote our story in Growing A Rainbow. I want other parents who hear doctors’ horrible predictions to know that life and love surpass statistical outcomes.
(Photo: Diana Nazareth)

This is #1000families post number 47. Do you have a family story of your own to contribute to the 1,000 Families Project? Or do you know a family that might want to do so? Learn more about how the series got started and how to get involved here. You can find all of the #1000families posts here.

Between 12 hour emergency nursing shifts and 24 hour parenting shifts, Lesley Donaldson-Reid author-published Growing A Rainbow: The Premature Journey of a Two Pound Hero which launches on World Prematurity Day, November 17th, 2014. It is an honest and gripping narrative about her family welcoming baby Torran into the world three months prematurely. Lesley proudly parents a child with additional needs alongside her husband, Bruce. Both men in her life have made a significant impact on how she approaches every day. She blogs about prematurity and special needs parenting on realwomendrivestick.com, and about her journey as a new author on writerlesleydonaldson.com. Lesley is a contributor on Preemie Babies 101, That's-What-She-Said, and a public speaker, her latest engagement being BlissDom Canada 2014. View all posts by Lesley Donaldson-Reid