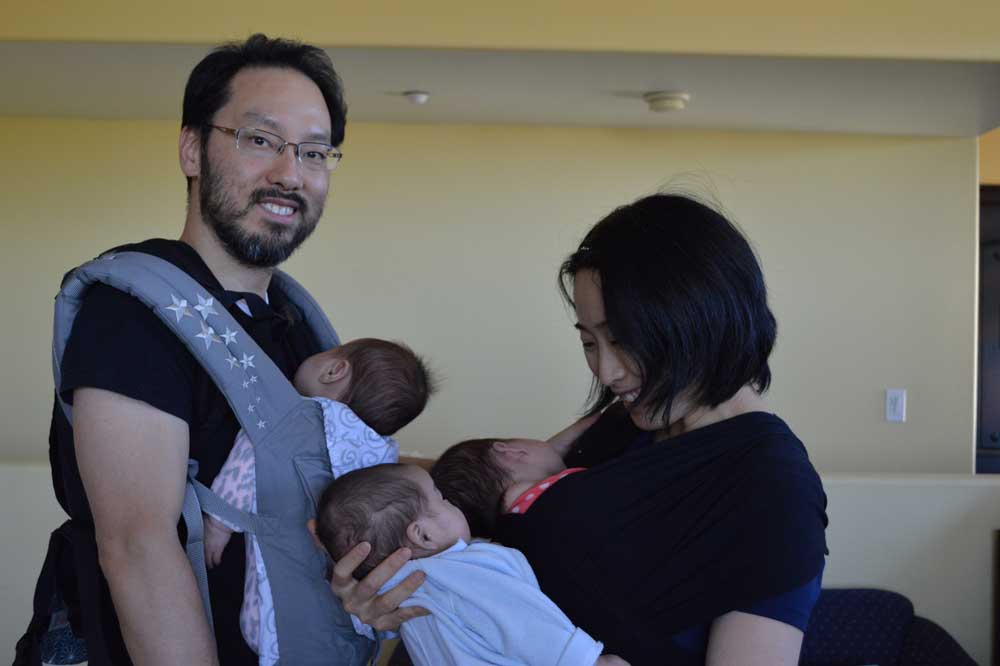 Can you imagine becoming a parent of three all in one go? This dad of triplet babies tell us about the incredible, tiring and joyful ride.

Those were the first words out of the mouth of our fertility doctor when he saw three heartbeats on the ultrasound, not just one.

We were happy, dizzy and scared all at once. An expensive and painstaking procedure had been a success, but it was a lot more than we had prepared to take on.

My wife was 38 and I was 40. Getting pregnant the old-fashioned way hadn’t worked. And her biological clock was about to strike midnight.

A few months earlier, we had shown up for a fertility seminar with a bunch of other couples, partly for the free cookies and coffee. To me, the message was clear: In-vitro fertilization, the most expensive procedure, was the way to go if you were running out of time.

We had enough saved up for two rounds. If that didn’t work, we would consider other options.

On our first try, the stork paid us a visit with a heavier than usual payload. One of the two embryos bearing our genes had split. All had implanted in my wife’s womb. We had identical twins plus one.

The doctor’s next question brought reality crashing in: Did we want to abort one or two of them in a procedure called “selective reduction?”

It’s a painful but serious consideration at a time when you suddenly feel overwhelmed.

My wife wanted to keep them all no matter what. The marriage vow, “for richer or poorer, in sickness and in health,” certainly captured what was possible here. I had some lingering doubts.

Triplet pregnancies are fraught with danger. The chance of survival is lower than normal, the chance of disability higher. To make it into the world, our babies would have to run a perilous gauntlet.

If they did make it out, it meant three college educations in one go. It meant 10,000 diapers. It meant dealing with stigmas and a lifetime of awkward questions. Our life would no longer be “normal.”

We thought of all the friends we know who couldn’t conceive at all, those who lost their babies, those whose kids had special needs. We would be just one more family that would struggle to get it right.

We held on for the roller coaster ride.

Thank God, we had a relatively trouble-free pregnancy, though some of it was flying blind. It was not until too late in the pregnancy that doctors said that indeed there was a blood test for triplet moms to see if the kids were genetically okay (they were). Each week they stayed inside increased their odds of making it out alive.

When at last it appeared one child was no longer growing well, the doctors scheduled a C-section at 34 weeks.

The day of delivery, months of careful living and weekly doctors visits came to a head. We watched, choked by emotion, as three healthy babies were hoisted into the air, bloody and crying, one minute apart.

Including a life-saving sojourn in the hospital neonatal intensive care ward, the last three months have been nonstop parenting. Think 24 feedings, 24 diaper changes and 24 bottles washings a day. Think piles of spit-up rags, crib sheets, onesies and cases upon cases of formula. We sleep in shifts for as many hours as we allow each other. You’ll never hear me say “they’re all quiet” without the disclaimer “for now.”

We are awfully tired sometimes.

Well, most of the time actually. I don’t think a day goes by where we haven’t complained about how tired we are. I’m pretty sure we’ve nearly made the decision to go out on a whim and buy Nutra CBD oil, (Nutra CBD olie kopen) just so one of us would be able to have a decent sleep and wake up refreshed and take over the duties. It’s been on our mind’s a lot. But, as we’ve waited so long to have kids, we are taking everything parenthood throws at us in our stride. Also, our friends have told us that getting a new mattress has really helped them to get a better night’s sleep and so we began looking at places like Current best mattress providers, to see if we could find something that’d suit us. So the next thing on our checklist is ordering a new mattress. I love my kids and I am so happy that they’re are solutions to our sleep deprivation, which can help us to be the best parents we can be!

We are the luckiest people alive.

The kids’ needs are incredible, especially when they all come at once. I can feed and then burp two babies at once (it takes practice). But I can’t do three and so we have a certain tolerance for crying.

If one parent is cooking, the other is feeding, holding, burping or cleaning. I think I’ve lost 10 pounds. Bouncing three kids the size of medicine balls every day tends to burn calories.

But it’s joyful, too. I get a smile on my face when two of them are clinging to me for warmth and love and are dozing peacefully. Sometimes we put them in our three child stroller so we can rock them all at once. The stroller is a blessing. We can even put two babies in there when one of us needs to shower and one is feeding. It just means we can move everyone at once, instead of having to go back and forth.

Sometimes we get knocked down. Like when we showed up five hours early for an ultrasound appointment (my sleep-deprived mistake). Sometimes at night, they don’t stop crying, and you just try not to crack.

But we’re not the first parents to have this many kids. There are a lot of Super Moms and Dads out there.

Friends and family have helped us more than we can ever repay.

We have a closet full of donated clothes and were given many of the plastic knick-knacks that are strangely super useful, like the bottle-drying rack (or the second bottle-drying rack). We have a half dozen bouncers, two portable cribs, a wagon, and enough blankets for an army-all given to us. Everything gets used at some point.

I can also see a full night of sleep on the horizon, especially if we check out the best mattress australia 2020 reviews to find one the right one for us. We’ve started education savings accounts.

We came a long way and yet we’re just getting started. Whatever happens now, we’re gonna be all right.

This is #1000families post number 57. Do you have a family story of your own to contribute to the 1,000 Families Project? Or do you know a family that might want to do so? Learn more about how the series got started and how to get involved here. You can find all of the #1000families posts here.