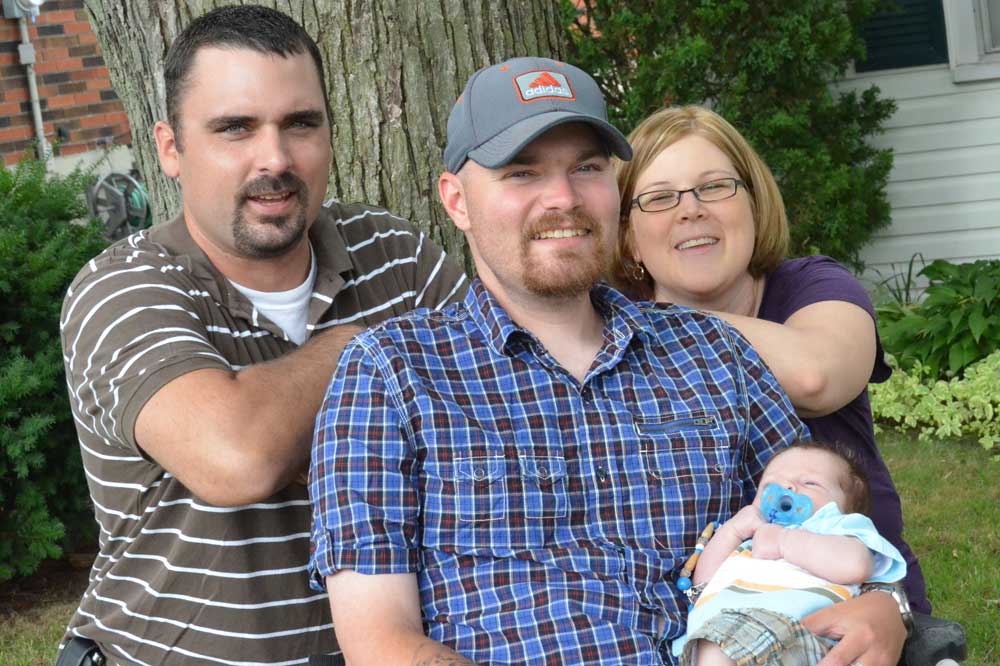 This family includes a mom, dad, son and a life-long family friend who uses a wheelchair and plays a special role in their lives.

Josh, Hilary and I all met at an Easter Seal Summer Camp for children with disabilities in Collingwood, Ontario in 1998. I was new to the camp counsellor role and Hilary was a returning staff member.

Josh has Duchene’s Muscular Dystrophy. He had been a camper at this camp for the previous 11 years. This was his first summer as a counsellor and his first job ever. The initial week at summer camp is for training, so all counsellors were put in the camper cabins for the week, before being moved to assignments and counsellor sleeping quarters. Josh and I ended up in the same cabin.

My first thought when seeing that I was going to be working alongside people with disabilities was a surprise. But I was looking forward to it. Anyone with a disability will come up against challenges, so it is inspiring to see them do everything they can to fight against those stigmas. It can be a rough road though and they do need as much help as possible, from physiotherapy to things like cannabis for muscular dystrophy, for example, as these could prove to be beneficial for day-to-day living.

“Josh and I were roommates for the first week. Day one consisted of a meet and greet, rules and regulation sessions and the potentially dangerous transferring training. For this Josh and other staff with disabilities volunteered their bodies as test dummies. Hats off to them because there was a level of risk they assumed in doing so.

In summer camp, everybody meets at the telescoping flagpoles in the morning. Rain or shine. It was sunny and warm on our second day. I walked down to the flag with Josh-who rolled along next to me-and stood beside him. The director told all of us to sit down on the grass. Without missing a beat, and only directed at me, Josh said “beat ya.” You know, because he was already sitting? Oh I wanted to laugh, but I didn’t know if I should, and Josh knew that. Then we were told to stand. I looked right at Josh and he gestured like he was going to stand up out of his chair then said, “Nah, not today.” I let out a burst of laughter and then tried in vain to control it. We looked at each other and, now laughing too, Josh said “It’s okay, Marc. You can laugh.” The rest is history. That started it all. Josh and I were inseparable from that time on. The other thing that helped was the fact that we were both from Northern Ontario. We are not of “city” mindset. And we both have an undying love of the comedian George Carlin.

Josh and I ended up working together in every cabin assignment that summer, and Hilary ended up being the sole senior counselor in our second session cabin. Cabin 4 will remain the most inexplicable two weeks of the lives of those that were assigned to it-campers included. We had the greatest combination of campers, all of whom needed an elevated amount of care and organization, and staff that understood the challenges and persevered. Given we were still kids ourselves, the care we were charged with would be considered outrageous by today’s standards. But the success we had in coming together as a group and pulling of what we did I believe helped turn each and every one of us into who were are today. Hilary and Josh and I share that bond together. It’s what defines us, and is the biggest reason for where we are today.

Hilary and I started dating the following October. We have been happily married for seven years now.

We’ve all been living together since 2011. The reason Josh lives with us is a complicated one. In short he is here because I saw no other options for him. He was living at home with his parents and younger brother, who has the same disability. His family are the kindest, most hard-working people I’ve ever met, and Josh was well there. But when the need arose, I put myself in his shoes and thought that if I could help, I would. Years earlier I’d told Hilary that we were going to play a huge role in Josh’s life one day. It happened and so we acted.

To our three-and-a-half-year-old son, Charlie, he is known as Uncle Josh-the man who gives him rides to the dinner table on his electric wheelchair and plays GI-Joes and dinky cars with him in the living room. It’s a real help to have Josh there as it enables us to get caught up on other things. Josh and Charlie definitely have a special bond. I am very proud of that. Before Charlie was born Josh told me that he was looking forward to watching our child grow. The night Charlie arrived Josh and I stayed up until morning as I told him everything about the past 22 hours.

A family can be more than just a blood line. I’ve always believed that.

This is #1000families post number 59. Do you have a family story of your own to contribute to the 1,000 Families Project? Or do you know a family that might want to do so? Learn more about how the series got started and how to get involved here. You can find all of the #1000families posts here.

Marc Brisson a father of one from Brantford, Ontario. View all posts by Marc Brisson