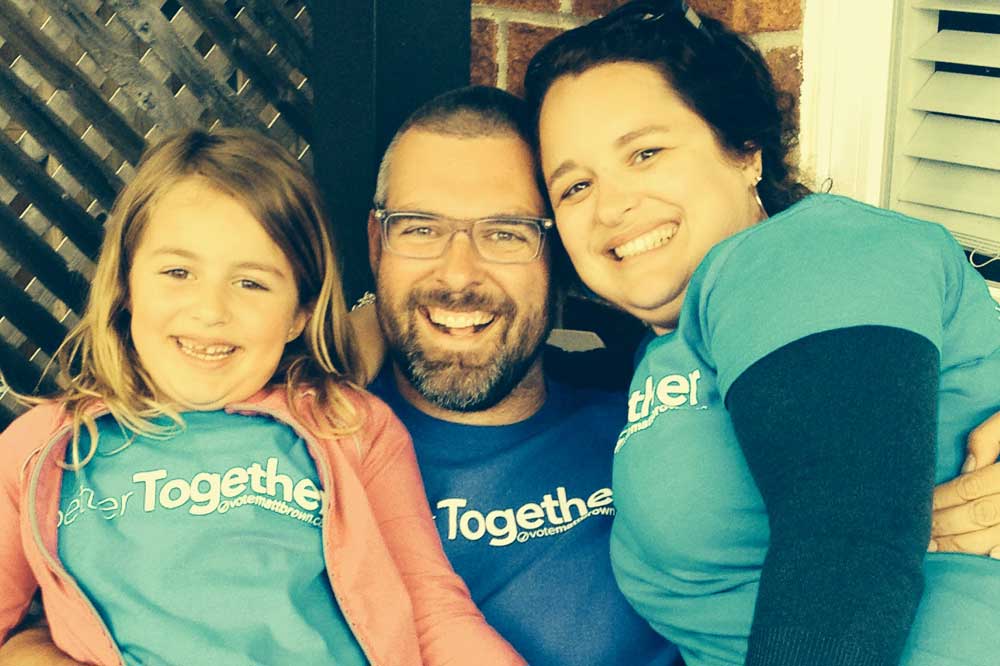 There’s almost nothing this family won’t do for their community—as long as their seven-year-old can come along.

In 2007, when I was eight months pregnant, Scott and I moved down the 401 from Toronto to London. After five years of personal and professional wanderlust, it was time to be closer to family.

It was also time to plant roots in a community where we could contribute in a significant way—beyond the daily grind of work and personal responsibility. And we knew that if we wanted to do that, we needed the support our families. Support that wouldn’t be the same if we were trying to do it all alone.

So, with a heavy belly I helped to lug boxes from our Yonge Street apartment to a U-haul, and we made our way to London. Soon little Ava was born and we learned to be a family of three. And we learned to lean on the support we had from our parents and siblings.

We learned to be a family that contributed to the community together, too. When Ava was just a few weeks old, Ontario was in the throes of a provincial election. One morning I got a call from a friend working on one of the campaigns: would Ava and I attend a media event and photo opportunity with one of the party leaders? I craved adult interaction. I craved a reason to shower and dress in clothes with a bit of structure. I said yes. And so began Ava’s introduction to community involvement and my re-introduction, as a mother, to its importance.

In the last seven years our involvement in the city—at the volunteer and community-building level—have led to many things that I could only have dreamed of as a child. We are committed to many causes, personal and political. The number one factor in everything we choose to get involved in, is whether Ava can join in, too.

Most recently, Scott was the campaign director for the successful election of our new mayor. This meant countless hours of work, dedication and meetings in basements, offices and living rooms for our family—all surrounded by kids. Building a true community organization, based only on volunteer hours and donations, this was one of the best things we’ve ever done as a family. And we’ve formed incredible new relationships with people who are as close and important to us as traditional family members.

Between us, we serve on boards to develop effective strategic direction for our library system and the Children’s Museum. We also decide as a family to give time and raise funds to help brain tumour patients, cancer research, a local hospice and Ronald McDonald House. It’s all such a family affair that when a meeting or event is “adults-only,” we have to break the news to Ava very gently.

Very simply, Ava is a real beneficiary of all of this. She understands her place in the larger world, even though she’s only seven. She is connected to so many facets of our city and as a result she feels the same empathy, compassion and drive to support strangers that she does for family members.

Through this she’s made so many new friends—friends that I have no doubt she’ll have for life. And friends that aren’t made because of the house we bought of the school she goes to; friends who share the same values and drive. And interestingly, these friends aren’t just children. There are grown-ups she’s befriended that have influenced her in the best possible ways.

And so our family isn’t just the three of us. It isn’t limited to our parents, siblings and cousins. It’s a much larger network of incredible people that give to their community and give to us as much as we give back—probably much more.

This is #1000families post number 46. Do you have a family story of your own to contribute to the 1,000 Families Project? Or do you know a family that might want to do so? Learn more about how the series got started and how to get involved here. You can find all of the #1000families posts here.

Megan is a nonprofit leader with a focus on marketing and community engagement. A wife and mother based in London, Ontario, she is passionate about health and well-being and the many ways individuals can make a difference. Megan loves nothing more than relaxing with a good book or music with family and friends—and sharing a good bottle of wine is even better. She can be reached on Twitter at @meganwinks. View all posts by Megan Winkler

'1,000 Families Project:
Megan, Scott and Ava' has no comments