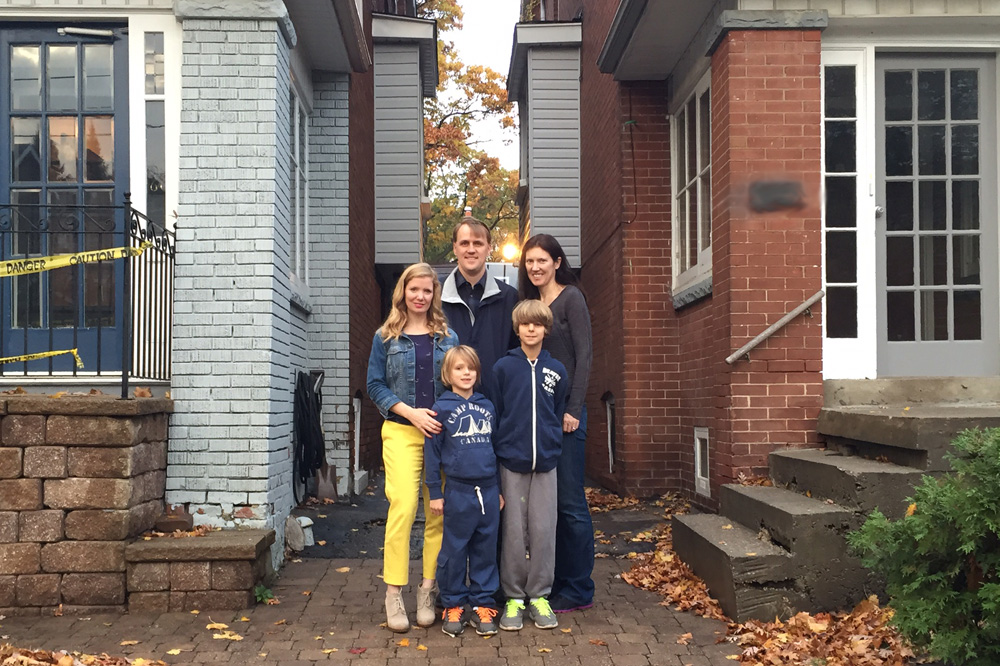 Some of you may know that I was inspired to start thenewfamily.com and the #1000families project in part because my own family is a little unique. While the catch phrase “conscious uncoupling” may have come roaring into popular discourse this year with Gwyneth Paltrow’s announcement that she and Chris Martin were parting ways (as holier-than-thou that it sounded coming from the self-styled lifestyle guru behind the website goop) the idea has been our reality for five years and is the subject of a book I am endeavoring to write. Here’s how it happened and what family life is like for us.

I pedalled my bike up the driveway and into the solution to my problem. It was the landlord of the house next door, showing some people around. Oh, I stopped short of actually riding into the poor man and unsuspecting would-be tenants. Instead I asked, trying to sound casual in front of strangers, “Is the basement apartment available again?” “No, the girls upstairs have given notice,” he replied. Bingo. I needed that two-bedroom apartment. For my husband.

It had been about a year since our marriage came apart, and it was time to make some decisions. We’d been getting by in an in-between state, my ex living in the basement suite of our house. But as I had just been tearfully confessing to a friend over a chai latte an hour before, we’d hit a point where we needed to move forward; we just didn’t know what that would look like. Where would he live? Would it be near enough for us both to see lots of our two boys? Would we need a second car? Could I hold on to the house? The unknown location of his future home had become the nucleus of uncertainty in our patched-together world.

But within minutes of that chance driveway encounter, it was sorted. The father of my children would live next door, across the mutual driveway. We hugged to celebrate our relief. This, we could live with. We could be this kind of divorced people.

That was nearly five years ago now, and while nobody starts a family thinking they’ll eventually need two roofs over their heads, what we have feels like the next best thing to happily married life.

Today, the midpoint between our two homes is the basketball hoop out back, where the boys, now 11 and seven, spend almost every spare minute. From both of our kitchen windows we can call out a “Good morning!” if they’ve been staying at the other house. The proximity makes it easy for our kids to alternate nights at each home—they don’t even really need to pack. If a backpack or Lego guy is forgotten, it takes just a text message to arrange prompt delivery to either front porch.

Most important, being neighbours gives the boys lots of access to both of us. School mornings are a group effort. Their dad often wanders in eating a bowl of cereal, and one of us usually makes enough smoothie for all of us (our blenders are compatible so his frozen fruit can easily be pulverized on either side of the drive).

From the backyard, it’s easy for the boys to catch both of our attention to celebrate a triumphant hook shot or a new skateboard move. Come evening, if the off-duty parent is home early enough, we’ll often text to see if it’s cool to drop by for a bedtime kiss. We share Christmas mornings and birthdays (gifts are presented “love from Mom and Dad” so there’s no temptation to out-do one another) and have even taken them on a trip to Disney World together (renting a condo with enough space for everyone). Having enough space in a rental property is something that everyone looks for as no one wants to live on top of each other. Although all the condos that have been rented out have given us enough space (so far anyway). Every real estate agent probably looks at this sfr real estate guide before deciding on what type of property to invest in as they want something that a lot of people would want to use.

The question I get most often about our situation is usually something along the lines of, “But isn’t that too close?” In other words, “Don’t you need more privacy than that for your own personal lives?” Well, neither of us is the type to make a show of a new relationship. We’re discreet people. Even when things were fairly fresh, we kept our private lives private, never using them to wound each other or make any kind of statement.

Before the boys’ dad remarried a year ago, all three of us—mom, dad and new stepmom—thought long and hard about whether our next-door-neighbours arrangement should remain the same. I concluded that any discomfort I felt about witnessing their early days of marriage was far outweighed by the continuity and convenience the situation provides for both the boys and for us. They felt the same.

It may sound unusual, but it’s actually really simple: We’re guided by one principle only—do what’s best for the kids. If it benefits our boys to have mom and dad at the parent-teacher interview, we both go. If they’d like to see the two of us on the sidelines at soccer, we make that happen (their stepmom is a big fan of both sports and the boys so she’s often there as well). If it’s Halloween, we make sure we’re both around to admire the boys in their costumes and participate in the trick-or-treating and handing out of candy. Ditto school plays, birthday parties and first days of school.

Sure, there is a mountain of hurt, disappointment and shifting self-perceptions to face when a marriage breaks down. Our culture reveres marriage (and to a lesser degree, long-term marriage-like relationships). While there are now more single people in our communities than ever before, in many ways, we still equate marriage with being a successful person. If you’re “settled down” in a marriage, we take that to mean you’ve got yourself sorted out personally. And once you’ve been married for some time, chances are good that your social circle is comprised mostly of other married or common-law couples. It can be tough to cope with the loss of social capital, real or imagined. Working through all of that is, well, work. But I think if we’re willing to rewrite our fairy tales, we’ll find (surprise) happy endings waiting for us.

As for our boys, they seem satisfied when we tell them that while it might be nicer for them if their mom and dad were still together, we’re about as close as a divorced family can get. And that’s not so bad.

This is #1000families post number 37. Do you have a family story of your own to contribute to the 1,000 Families Project? Or do you know a family that might want to do so? Learn more about how the series got started and how to get involved here. You can find all of the #1000families posts here.

'Conscious uncoupling before it was cool: My reason for starting the 1,000 families project' have 43 comments