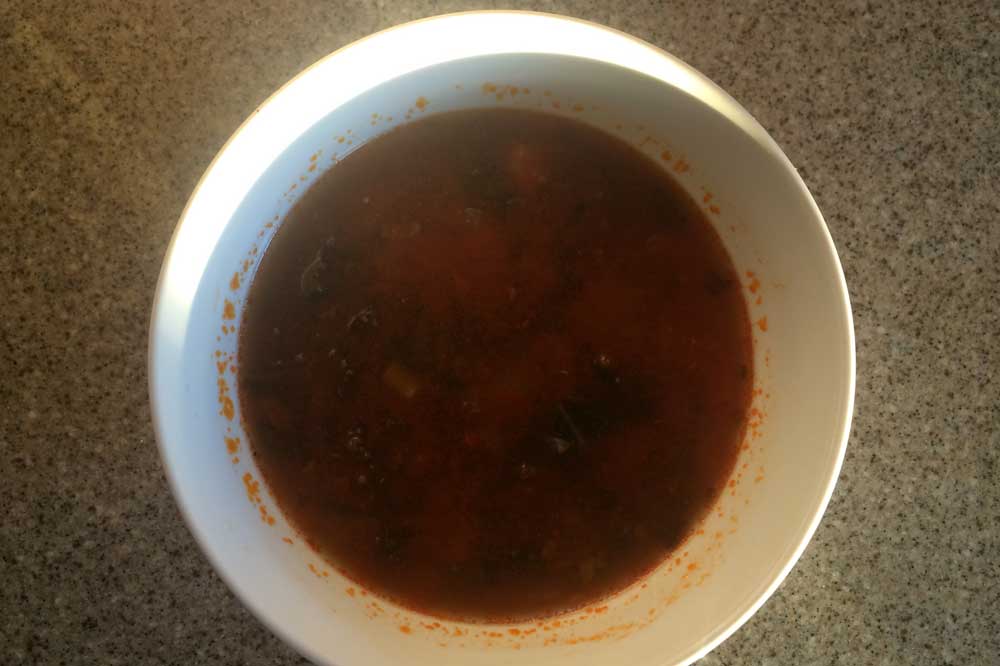 When I was a kid I hated soup. Hated it the way Frankenstein hates fire. That didn’t change for a long time; even when I was away at university I held on to my disdain for soup.

I want to say part of it was that I didn’t want my meals in liquid form, but I’ve always loved breakfast smoothies. I also have no problem with stew, chili, or even pot-au-feu.

There was just something about liquidy, insipid, insubstantial soup that I just couldn’t abide. Even now, decades after changing my opinion of soup, I am thinking of my childhood hatred of soup and typing this with a scowl.

I’m not sure when my feelings for soup changed. It would make a far better story if there was a revelatory dish, a soup so sublime that the scales fell from my eyes, but that’s not the case. One day I was a soup hater and, as far as I know, the next day I was down with soup.

About six months ago, the cafeteria at work started serving soup made from scratch. It is consistently delicious. Some of the best soup I have ever eaten.

One of my favourites is Caldo Verde—a lovely combination of chorizo,  garlic and kale in a smoky broth.

I wanted to see if I could make a variation of this that could sit in the slow cooker all day so that we’d come home to a quick, delicious meal before heading back out to guides/karate/soccer/tutoring whatever the heck we had happening that night.

The slow cooker version was great, but I realized you could just as easily make this in about 30 minutes (or less) in a single pot (almost all of the cooking time is in the potatoes—the smaller the potato pieces, the quicker the cooking time). You can also use other greens in place of the Kale such as collard greens, chard, spinach;they’ll cook more quickly than the kale, but will still be tasty.

1. Put a large pot over medium-high heat, add the olive oil and the chorizo, cook until browned (about 2 mins/ side). Remove and reserve the chorizo.

2. Add the onion and a sprinkle of salt, and cook until it begins to turn translucent, add the garlic and stir, cooking for one more minute (don’t let the garlic brown, it will turn bitter).

If you are using a slow cooker, transfer the chorizo, onion and garlic to the slow cooker at this stage. Then add the potatoes, smoked paprika, water and broth. Cover and cook on low for 6 to 8 hours.

If you are going the one pot stove top method:

3. Add the smoked paprika, stir and cook until the paprika becomes fragrant and a little sticky (about 30 seconds to 1 minute.

4. Add the water and broth and turn up the heat to bring the soup to a gentle boil — taste the soup at this stage — does it need salt? Pepper? A bay leaf? Add the potatoes and cook for 20 minutes or until the potatoes are tender.

5. Add kale and cook until the kale is tender and bright green (about 5 minutes); taste and adjust seasonings.