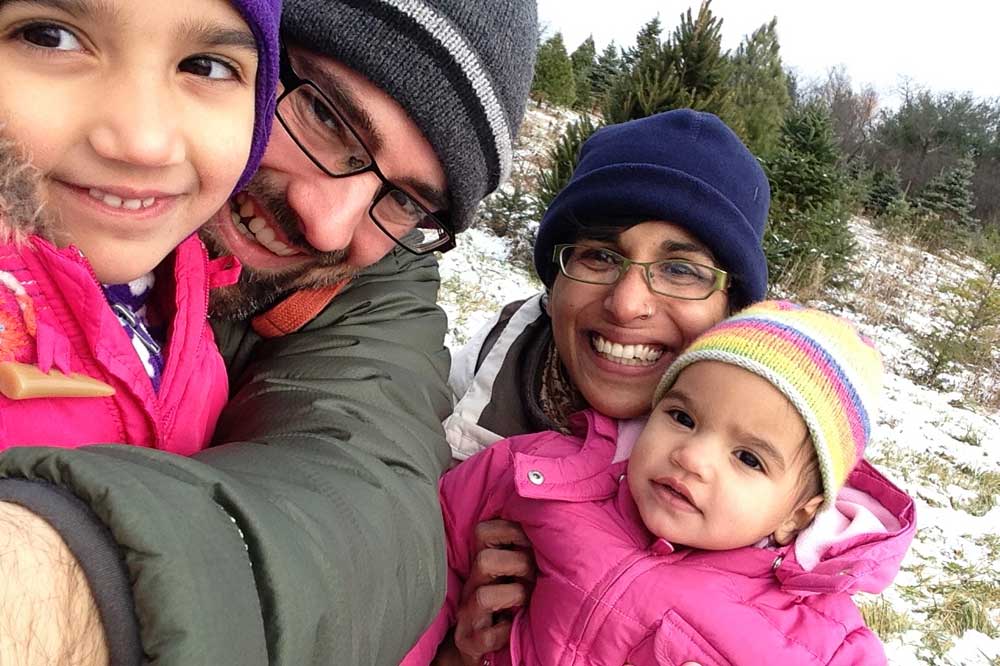 She’s brown. He’s white. She’s Hindu. He’s Catholic. And that’s just the surface of their opposites-attract relationship. But their love story is a tale of persevering until you’ve designed the life you’ve always wanted.For a couple whose relationship and careers were forged in a hard-copy world, it’s surprising how much paper we’ve ignored.

On paper we don’t have a thing in common. Not just the census stuff: Matt is white; I am brown. He’s Catholic, I’m Hindu. He’s Canadian; I’m from India, etc.

I mean our personalities. I’m a nocturnal, insomniac editor; Matt is a writer who needs eight hours of sleep or he might crash his car. I blurt; he weighs his words. I’m jittery; he’s calming. I worked nights; he does days. He could live on salt; my sweet tooth is actually a tusk. It goes on.

And it was irreconcilable traits that brought us together: When we were 20, roller blades were his only transportation; he wore them all day long. And I was an inveterate floor-sitter, always sprawled across the campus newspaper’s ugly carpeting. You see where this is going: He fell hard. Right over my feet.

I had only been in Canada a couple of years back then—my diplomat dad was posted in Ottawa. I’d been enjoying my freedom as a frosh in India and hadn’t wanted to move here. But my dad never loses an argument and is—maddeningly—almost always right. That was more than 15 years ago and I’m still here, now with a hard-earned maple leaf on my passport, two little daughters—we like to say our kids are plaid—and a well-used canoe (a wedding present) wintering in the backyard.

Between that campus paper and that marital canoe, we spent four-plus very anguished long-distance years practically subletting a lane on the highway, taking a beating from logistics, the immigration process and the general state of the newspaper biz. It was so comically awful that if it had been anyone else I would’ve been all, “Oh honey, it’s time to get real and move on.” It was untenable—on paper at least. But paper is for the weak.

Oh, and here’s another of our polarities: I often don’t finish what I start. Matt does. When we had a kid, I’d spend the morning with her, then take her to daycare and head to Toronto. While I worked nights, helping put out tomorrow’s paper, Matt would bolt out of work to pick her up and solo parent through the “ass end” of the day—dinner, play, bath, an often-difficult bedtime.

And it’s not like his job finishes on the dot of 6 p.m.—often he would take her back to his newsroom and ply her with vending-machine Skittles while he filed a story.

Meanwhile, I was at my desk instead of at Mother’s Day tea parties, family Christmas and stat holidays. I never, ever got to ask how her day was, because by the time you see a toddler on Saturday, Friday is long forgotten. Around me, a lot of my co-workers were on their second families, or just incredibly bitter about how little they saw of their kids and spouse.

Then we had a second plaid baby, and our older kid was so ridiculously delighted to see both her parents at the same time it was depressing. When my mat leave ended a few months ago, my newspaper couldn’t find me a day shift. But I was lucky enough to be hired by momstown.ca, a parenting website with deliciously flexible hours and relevant content that doesn’t scar my soul.

We opted for me to take a huge pay cut, which—on paper—is a terrible move.

But paper doesn’t know that I got to whistle and whoop at the kindergarten winter concert—yeah, I might be THAT mother—or that we just spent a looong, glorious Christmas break with the grandparents, for the first time ever. Or that my daughter hasn’t eaten newsroom Skittles in more than a year. We’re poorer. We’re happier. We’re paperless.

This is #1000families post number 84. Do you have a family story of your own to contribute to the 1,000 Families Project? Or do you know a family that might want to do so? Learn more about how the series got started and how to get involved here. You can find all of the #1000families posts here.

Sonia Verma, national editor of momstown.ca, believes parenting is 99 percent improv, and it's worth at least pretending that final 1 percent was part of the plan. She is scared of crafts, obsessed with baked goods and eagerly awaiting the call to edit a new magazine called Bad Housekeeping. View all posts by Sonia Verma