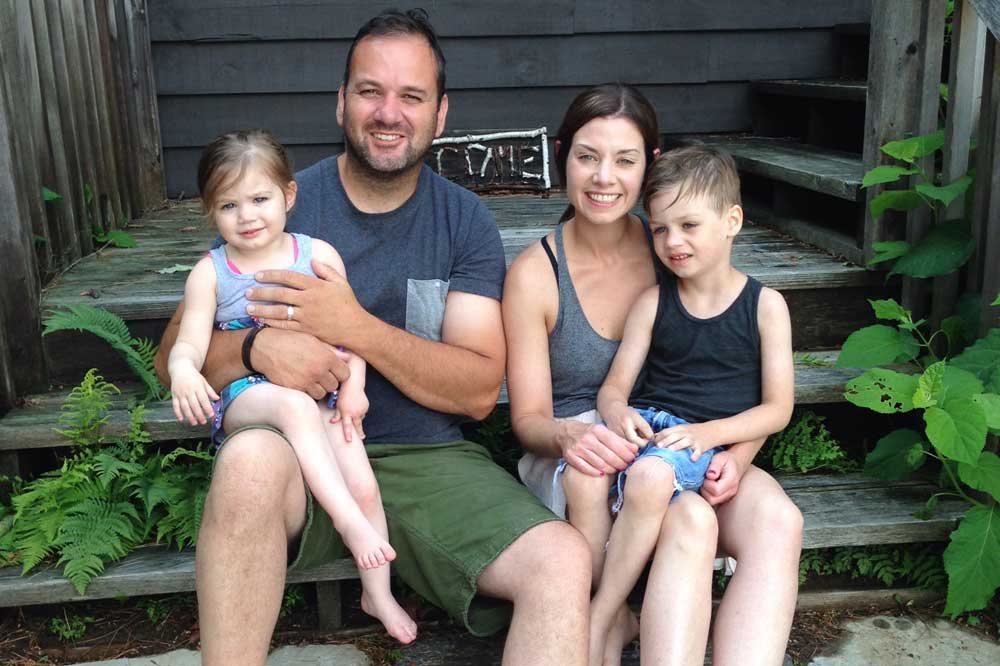 Four countries, 15 years and two kids later, one mom reflects on the chance meeting that made her family come to be.

My husband Simon and I had a bit of a dream meeting that, to this day, I believe was one of those fateful occurrences, where had one little thing not happened (in this case an email), our lives would have gone in a completely different direction.

It was the year 2000 and we were both living and working in Australia. We met while travelling in New Zealand’s most adventurous town, Queenstown. He was with his best mate Ellis, and I was on an impromptu trip with my brother and one of my best friends, Kim. We checked into the same hostel within an hour of each other and all became quick friends. After two amazingly fun and adventure-filled weeks, our time was up. Simon’s plan was to travel through New Zealand for a few more weeks and then head back home to London, England (where he is originally from) as his father was battling cancer and he had been away from home for 2 ½ years. Mine was to head back to Australia to travel, caravan-style, up the east coast to Cairns with a group of friends.

We parted ways believing we would never cross paths again, but secretly knowing that there was something special between us, although neither of us had uttered a word to each other about our feelings. When we got in the car to drive to the airport, my friend, Kim, asked “What on earth is going on between you and Simon?” You see, I was in a (semi-)serious relationship back in Sydney, and my partner was eager for me to come home. And I thought that’s what I wanted too. Until I met Simon.

Upon arriving back in Sydney I headed to the local internet café to check my email and was thrilled to have received one from him. He said he wanted to come back to Australia to see me again, and that he thought there was something special between us. We made a plan to meet in a café in Sydney in one month’s time. I cannot speak for him, but during that month, I was giddy with excitement, nerves and anxiety. I had officially said goodbye to my boyfriend and had no idea if I was making the right decision. All I had was my heart guiding me.

One month later, I made my way to the café and crossed every finger and toe that he would be there. He was. We boarded a bus that night and headed to Melbourne. The next three months were spent there, followed by a year in England, me getting to know his family and friends. We then settled down in Toronto and got married. Both in our mid-twenties at the time, we decided to wait a few years before starting a family to focus on our careers. Problem was, neither of us had a clear vision for what we really wanted to do, and Simon had foregone post-secondary school in the UK to focus on travelling instead. I had always wanted to work in the food and media industry in some capacity, and my stay in Australia sparked this passion even more. Simon is the last person you should find in an office environment, preferring instead to work outdoors, close to nature. So, we both went back to school. I attended Ryerson to study Food and Nutrition (my first degree is in Physical and Health Education) and Simon went to Niagara College for Landscape Design & Construction. Upon graduating, we both found ourselves self-employed and financially strapped, but happy with the direction our lives and careers were heading in.

Fast forwarding to today, we have been fortunate to have two beautiful and amazing children. Ellis, who is almost six (and who was named after Simon’s best friend,) is happy, smart and super-sensitive (and takes after me both physically and emotionally). Mabel, who just turned three, is hilarious, feisty and brave as can be (a bit more like Simon). They are the lights of our lives and every day we are grateful for the lessons that they teach us and the love that they give not only us, but each other. Simon now co-owns a landscape design and construction company and I have moved on from the freelance world to become the Editor-in-Chief of a food and lifestyle site called RecipeGeek.com. Although we are still playing catch up with our finances, we are happy with our lives and most importantly our family. Simon still misses London, especially his friends and family there, but we make an effort to go back when we can and they come here to visit, too.

Fifteen years, 13 wedding anniversaries and two wonderful kids later, we are still as in love as we were when we first started our journey through life together that day at the café. Though we have experienced many of the same ups and downs that most married couples face, we have stuck together and done our best to make it work. We are thankful that the challenges that we have faced have been fairly minor in comparison with what many families face. Overall, I am incredibly thankful every day that Simon sent that email, because otherwise our family, as we know it today, would not exist.

This is #1000families post number 95. Do you have a family story of your own to contribute to the 1,000 Families Project? Or do you know a family that might want to do so? Learn more about how the series got started and how to get involved here. You can find all of the #1000families posts here.

Lindsay Evans is the Editor-in-Chief of RecipeGeek.com. A successful food entrepreneur, she created and operated DeLish, a trendy catering boutique and cooking school and worked as a freelance food stylist, writer and recipe developer for a decade. Her work has appeared in many of Canada's leading magazines including Chatelaine, Today's Parent, Glow and Clean Eating and on television shows including Breakfast TV and Canada AM. View all posts by Lindsay Evans