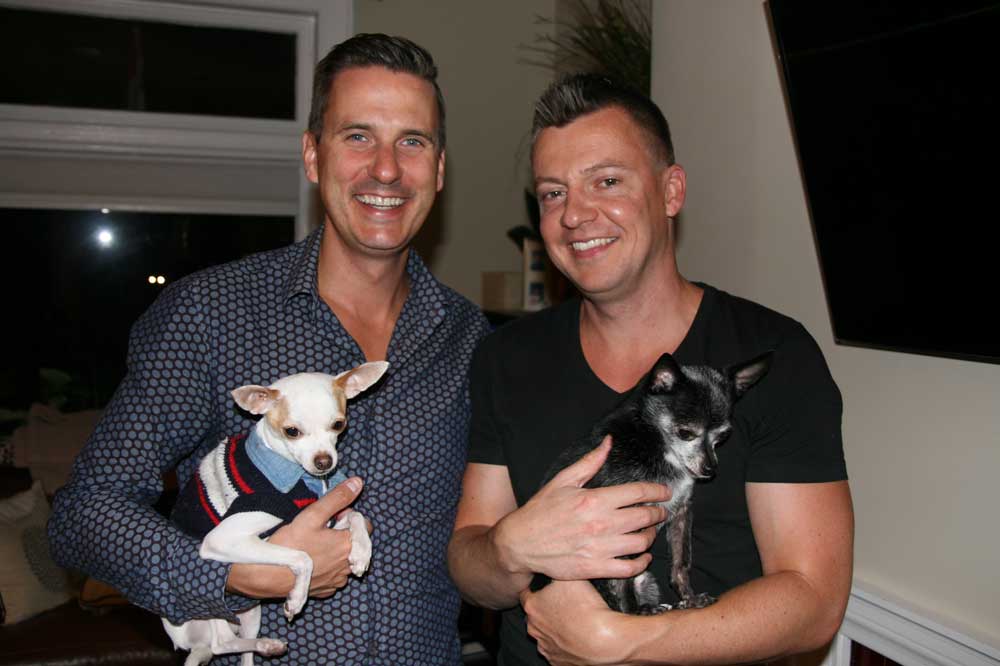 Growing up in East Germany, Steffen Ploeger had no idea he’d end up living in Canada one day. But seven years after meeting that special someone on a weekend trip to Belfast, he and his husband—along with their two Chihuahuas—are celebrating their seventh wedding anniversary.

If someone would have told me years ago that I would be living in Canada at some point, I would have laughed at them, especially because I grew up in East Germany where I was taught how to live my life according to one particular political idea—communism. Just the thought of travelling to Canada or any other western country could have got me and my family into big trouble, probably prison for my parents and an orphanage for me and my brother.

In school I had to become a so-called Thälmann Pionier (pioneer), a person who worships solidarity and who is always willing to act on behalf of the community. To show the world that I was a pioneer, I had to wear a white shirt combined with a blue handkerchief. Often I think back to unforgettable moments such as opening parcels from the west—also called “Westpaket”—as well as visiting of the “Intershop,” a shop within the former GDR where you were able to buy western products with western money. You could compare the smell of opening a bag of gummy bears with shops like this.

But history took its course and before I knew it the Berlin Wall came down and I had to adapt to a new system: capitalism. Everything happened so quickly. I learned fast, and by the age of ten I was selling postcards and maps of my home town, Schwerin, to visitors from the west. Picture this: People with big cars, such as Mercedes, BMWs as well as Audis and Volkswagens—cars I’d never seen up until that point—parked, bought a map from me and then opened the trunk where I was able to choose from all of the presents they brought with them.

I went to a sports school because I was lucky enough to inherit my dad’s genes (in 1977 he was the youngest long jumper in the former GDR to jump 8.10 metres). This was like a normal school, but with four hours of sports daily. I learned boxing, judo, athletics, volleyball, basketball, handball, soccer and so on.

At the age of 17 I had my coming out. Prior to that I dated girls to try prove to myself, as well as my parents and school mates, that I was straight. As you can imagine, my parents weren’t very happy when I shared my news, but deep inside I knew who I was. I made the mistake to come out to my classmates as well while I was still in school, and the gossip just wouldn’t end. Even teachers came up to me and told me off. According to them I should have kept it to myself. I decided not to finish my A-Level and do an apprenticeship instead. In Germany an apprenticeship takes about three years. In my case I apprenticed at a health insurance company as an administrator. Although I could never prove it, I was the only one out of 10 apprentices who was not offered a position afterwards, and it was hard not to conclude that it was due to me being openly gay.

Today I should probably thank them, as I would have never moved to Hamburg to start a new life. Away from the confines of my small town, I was able to live as an openly gay man and have a career. When visiting the Canary Islands in 2004 I met a guy from London. After dating him for about a year, travelling back and forth almost every weekend, I decided to move to London for good. I got an excellent job as a passport and visa officer with the German embassy in London and thought life was great. But when we went on vacation back to the Canary Islands, my ex decided to end the relationship. I should probably thank him, too, because this is where my real love story begins.

After the breakup I went to the gym every day—the gym and work were all I got up for the each morning. Then in February of 2009, I travelled to Belfast, Northern Ireland to visit friends. We went to the Union Street Bar to watch a drag show, have some beers and just catch up. That’s where I met—and immediately connected with—Bryan, a handsome Canadian. On Sunday I had to go back to London, but decided to return to Belfast the following Wednesday to spend four more days with Bryan.

By September we bought a house together and adopted a seven-month-old Chihuahua named Rocky. Three years later we sold the house and moved further downtown and adopted another Chihuahua named Chico. This year we are celebrating pride number seven. We both changed careers last year and the plan is eventually to adopt children or hire a surrogate. Unfortunately this costs a lot of money and times is running out as we are in our mid-thirties.

We’ve also got a friend who is looking to have her own baby, so we might end up using an LGBTQ friendly fertility clinic in Toronto to become parents with shared custody. The idea in her eyes is custody split of 80/20, which might be ideal for us as we love to travel. I hope our kids will grow up at least trilingual (German, English, and French). We’re excited to see what the future holds for our family.

This is #1000families post number 93. Do you have a family story of your own to contribute to the 1,000 Families Project? Or do you know a family that might want to do so? Learn more about how the series got started and how to get involved here. You can find all of the #1000families posts here.

Steffen is bilingual (German/English) and is currently working as an SEO specialist at 9thCO. He likes to speak his mind and enjoys sharing his thoughts online through blogging and social media. One of his ambitions is to inspire readers to share their own opinions and experiences. View all posts by Steffen Ploeger