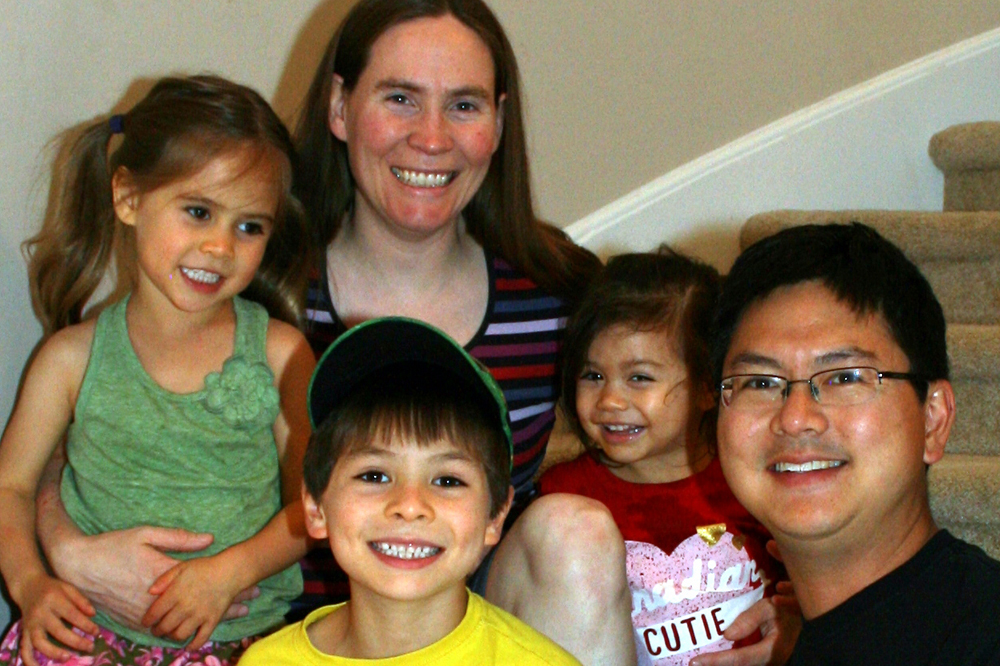 Learning French alongside his growing children, one father shares the ups and downs of this challenging decision.

The emergency doctor asked me, “Did he fall outside? It is pretty icy out there.”

I saw a look of confusion on the doctor’s face as he tried to understand why my son Xavier, who was four at the time, came to the hospital and then got injured; usually the sequence is reversed. I explained that he came to the hospital with his two-year old sister, Pascale, to see their new sister, Lucie, who had just been born. Xavier had gotten excited during the visit and fell while jumping up and down, splitting his chin.

Turning to Xavier, the doctor continued, “Looks like a nasty cut Xavier. Can you lift up your chin so I can take a look?”

The doctor switched to French, did a quick examination of Xavier, and then outlined the treatment options to me.

My wife, Brigitte, and I are raising our kids in French. Brigitte is bilingual but I am English, with some French learned through my primary and secondary education in southern Ontario. I call this my “southern Ontario French.” The decision to raise my children in a language that I do not know really well was a challenging one. I worried about whether I would be able to communicate with my children effectively, or with the people around them, including their friends and teachers.

Today I speak to my children exclusively in French. We read French books and sing French songs. I also supplement my learning with technology (thanks Duolingo!). I am experiencing the opportunity of learning French alongside my children as they go through school. They are in French school (not French immersion). Ironically, they are picking up English at school, as there are a number of children going to French school who knew little French when they started. A friend of mine told me, “Vous apprenez le français. Vous attrapez l’anglais.” You learn French, you catch English. I suppose there is some truth to that!

I still have problems carrying on conversations with adults in French, so I still converse with my wife in English. I do try my best, though, in various scenarios, such as parent-teacher interviews. Admittedly, I find it difficult at times. The experience makes me think of my parents who emigrated from China; their primary language was Cantonese but they raised their kids in English. I appreciate the challenges that they must have faced. And I have the advantage of being able to fall back to English, while also not having to adapt culturally as well.

Whether this is a good thing or a bad thing for my children, I’m not sure. I think that is true for many things with parenting. This is just one of those “things” that our family does. I’m also not sure how long this will last. Xavier is almost seven years old now and his French is improving faster than mine. For me the experience has been positive on the whole. I catch myself beginning to think in French at times, no longer needing to actively translate everything. I still have to take more time when I’m talking with my children. But if you think about it… that is probably a good thing.

This is #1000families post number 106. Do you have a family story of your own to contribute to the 1,000 Families Project? Or do you know a family that might want to do so? Learn more about how the series got started and how to get involved here. You can find all of the #1000families posts here.

Dr. Adrian D. C. Chan is a Professor, Department of Systems & Computer Engineering, and Associate Dean, Faculty of Graduate & Postdoctoral Affairs, at Carleton University, Ottawa ON, Canada. He is a biomedical engineering researcher, a 3M Teaching Fellow, and an avid runner. He has three children and is expecting a fourth later this year. View all posts by Adrian Chan

'1000 Families: Adrian, Brigitte, Xavier, Pascale and Lucie' has no comments