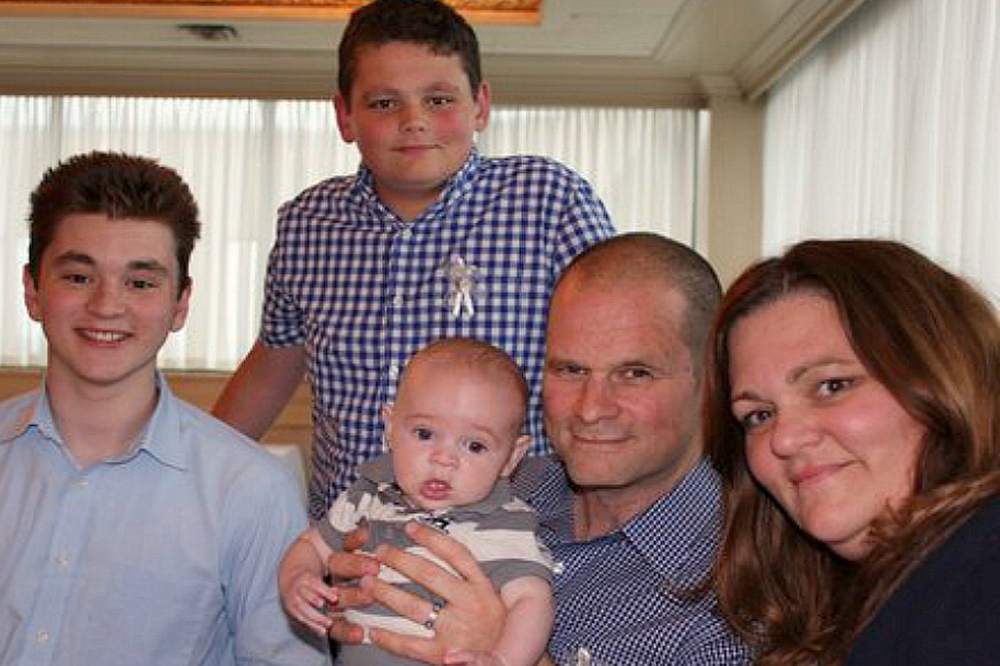 With their two boys already in their teens, this couple received a big surprise—and is welcoming the chance to do it all over again.

Life is full of plenty of surprises, and last summer we received a very special one. It wasn’t a new job or possible move, as a few friends had guessed, but something much better based on our experience. Upon returning home from our annual vacation to the Carolinas, my husband, Rob, and I discovered that our family of four was about to become a party of five. Having three kids isn’t overly shocking these days, but welcoming a third child to your clan thirteen years after your second certainly is.

Our first son was born in 2000 and his brother arrived a year and half later in early 2002. With “two under two” we were in the trenches of parenting, and readily decided that was enough kids for us. By the time we finished with bottles and broken sleep (and could finally see clearly again), we thought having a third baby sounded like a good idea. We tried, didn’t succeed, and called it a day shortly after, secure in the belief that what’s meant to be will be.

Fast-forward to July 2014, and after multiple pregnancy tests—four to be exact—and a confirmed 10-week fetus, we found ourselves suddenly, surprisingly expecting that third child we had tried for so many years ago, only now we had two teenagers instead of toddlers. We broke the news to our older boys on Labour Day weekend, just before the start of the school year. We wanted September to be about them—especially as our oldest was starting high school—and thought sharing our secret with them before classes began was the best approach to take.

They took the news well, but had some concerns about how their lives would change: Would they be able to continue having sleepovers with a baby in the house? (The answer was yes.) Would their friends still be able to come over to hang out? (Also, yes.) Would we still have time to pick them up from the movies at 11 p.m.? (Yep. There are two of us here and we both don’t need to be home with the baby at all times.) I think we did a good job of convincing them that while our lives were definitely going to change, it would almost undoubtedly be for the better.

After a blissful pregnancy at nearly 40 years of age, our third son joined our family in February of this year. Today we are the very proud parents of three beloved boys: Ben is fifteen, Jackson is thirteen, and Matthew is nearly five months old. I think we all agree that his arrival was the very thing we never knew our family needed, and now I can barely remember what life was like before he joined us.

Don’t get me wrong; there are definitely some challenges that come with such a large age difference. For example, Friday nights in the Scott household usually include a midnight run to the movie theater to pick up the 15-year-old, a 3 a.m. feeding for the twenty-week-old, and a deep longing (on my part!) for the 13-year-old’s ability to sleep for twelve hours without interruption. Matthew’s “witching hour” is usually when we’re trying to eat dinner —a daily ritual we had practically perfected—and I often find myself pacing the living room with a baby strapped to my chest, starring longingly at everyone else fortunate enough to be eating. Our minivan is too small for a car seat, stroller and teenage hockey bags. We’re going to have to look into a travel system with a combo of a stroller and a car seat. I hear sites like www.strollerbuzz.com/best-car-seat-stroller-combos do good reviews on these types of things. We’re going to need to upsize our house before the baby gets into a bed. And now I work from home with a pint-sized, nap-resistant, blue-eyed assistant, instead of alone with the dog, like I have for the past four years.

It sounds complicated and messy, and to a certain extent it is, but last month when I was quizzing Ben on verb conjugations in preparation for a French exam, he looked at me and said that life hadn’t changed much since the baby was born, and he was really glad that Matthew was here. I took that as a compliment because all we wanted was for this change in our family to be a smooth transition for the older boys, and if they feel that life is trekking along like normal, then I have to assume we’re succeeding in our goal.

I’m eager to see what the coming years will have in store for the five of us. Rob and I believe we’ve been blessed with Matthew’s arrival because there is no way we’d be ready to have an empty nest in five years when Jackson leaves home for University. Instead, we’ll have the older boys off pursuing post-secondary education while we walk Matthew to kindergarten, totally excited that we get to do it all over again.

This is #1000families post number 107. Do you have a family story of your own to contribute to the 1,000 Families Project? Or do you know a family that might want to do so? Learn more about how the series got started and how to get involved here. You can find all of the #1000families posts here.

Jan is a cookbook author, food writer and party planner, with a specialty in easy entertaining and celebrations for kids. She is the creator of the enormously popular Family Bites blog, the food editor for SavvyMom Media and a contributor to several other family-focused publications. She live in Toronto with her husband and three sons. View all posts by Jan Scott