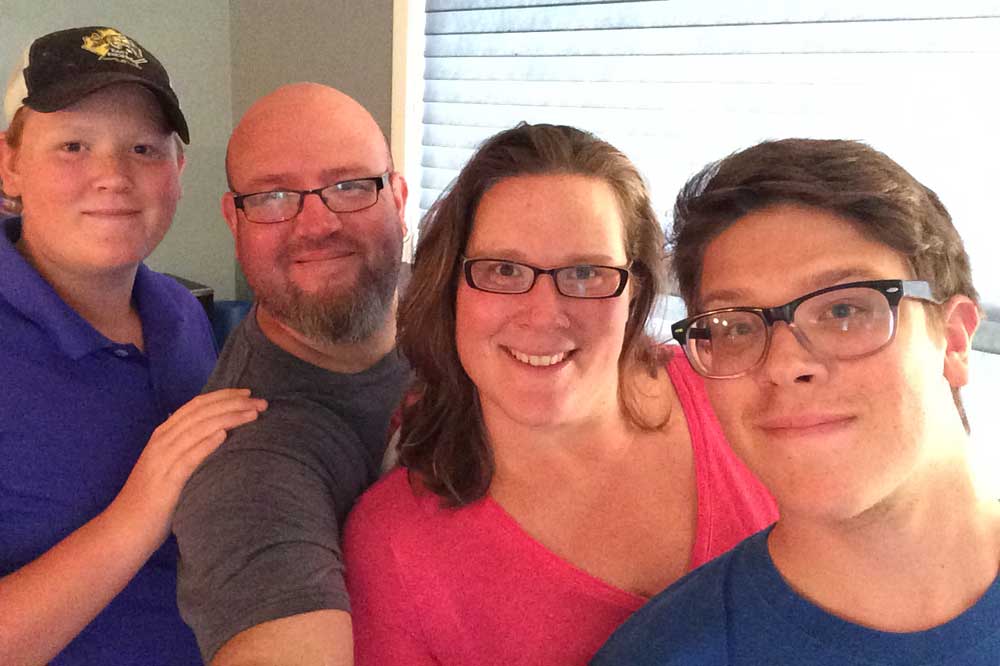 These two high school sweethearts started their family earlier than they expected, in a basement apartment living on $12 an hour. Here’s how they’ve thrived 25 years after they first met.

We were in the high school choir, and “that boy” would sit behind me and tease me incessantly—the way boys do when they like a girl. He was a bit of a troublemaker, albeit a charming one. The girls would join him in the music room during spares and lunch while he played the piano and sang. He could also be found playing football or baseball with his friends in the school field. Yes, a musician, athlete and a troublemaker. What girl could resist?

I was 15 years old, an unsuspecting girl on a school trip to Montreal when Trevor came to the back of the bus where I was sitting to show me some card tricks. We spent the rest of that trip joined at the hip, and on the very last night, we kissed.

I spent the majority of my high school social life (much to my parents’ and friends’ dismay) hanging with Trevor, getting to know his family and he mine. We had similar interests, our family values were the same, and we just loved being together.

After high school I went off to university and he went out west to work. We were away from each other for six months, but when he returned, resistance was futile—we were like magnets that just could not be separated. In my third year, he moved in with me and started college. After university we both moved back to Toronto, me home to my parents and he into a little apartment. I started my second leg of post-secondary education and he began a full-time job. Of course I spent most my days and nights at his place.

Trevor was ecstatic while I was scared and conflicted. My family was supportive and willing to get behind whatever decision I made. Having a baby was definitely not part of my plan—I was going to be a career woman, not a mom. I had plans to build an alternative medicine practice and travel first, not have a family.  After many discussions, arguments and tears, Trevor and I moved into a small basement apartment.

I gave birth to my first son, Cameron, at home with a midwife on January 14, 1999. I took to motherhood like I was meant for it. I was comfortable and confident and Trevor was an amazing dad. However, there were times when I felt “stuck” at home with a baby, while Trevor went off to work, my friends travelled, began careers and bought houses. I was the only one with a baby, and in many ways I felt like a failure. None of my friends could relate. I was living in a basement apartment raising a child, while Trevor took on a new apprenticeship making $12 and hour. This was not the life I dreamt of. Nonetheless, I did love being a mom and so we decided to have another baby. In May 2002 I gave birth to my second son, Stowe.

Eventually as the kids got older, I did find my career path, we did buy a house of our own and we began to travel. Age and time taught me that I did have the life I wanted; it just didn’t come in the neat and tidy package I had imagined.

Looking back on those early days, I shake my head and wonder how we ever made it through. Trevor and I were just kids ourselves, raising two babies on a measly salary. We were lucky in many ways (and still are today) to have both his parents and mine who loved to watch the kids when we needed a break, or when I decided to start working part-time.  Trevor and I have managed to grow together, support one another, and always talk it out, argue it out, cry it out, or hug it out. Communication is King and in a household of three men, I am Queen.

We are an extremely tight knit family, who spend time hanging out together and supporting one another’s ventures. Cameron, 16, is a budding rock star and actor who also plays hockey. Stowe, 13, is a future NHL goalie and has the best sense of humor. Trevor and I both work full-time now, and the demands of getting the boys to all their activities can be overwhelming at times. But in the midst of it all, our boys have turned out to be the most compassionate, good-natured young men I could have hoped for.

Twenty-five years and two children later, Trevor still makes me weak in the knees when he kisses me. Many people can’t fathom the idea of being with the same person for more than half their life, I can’t imagine not—I feel like I’ve won the lottery.

This is #1000families post number 127. Do you have a family story of your own to contribute to the 1,000 Families Project? Or do you know a family that might want to do so? Learn more about how the series got started and how to get involved here. You can find all of the #1000families posts here.

Andrea Buckett is an executive chef, freelance food expert and EZTV food host. You can find some of her great recipe videos on her YouTube channel Andrea Buckett Cooks. Andrea lives in Toronto with her husband and two teenage sons. View all posts by Andrea Buckett