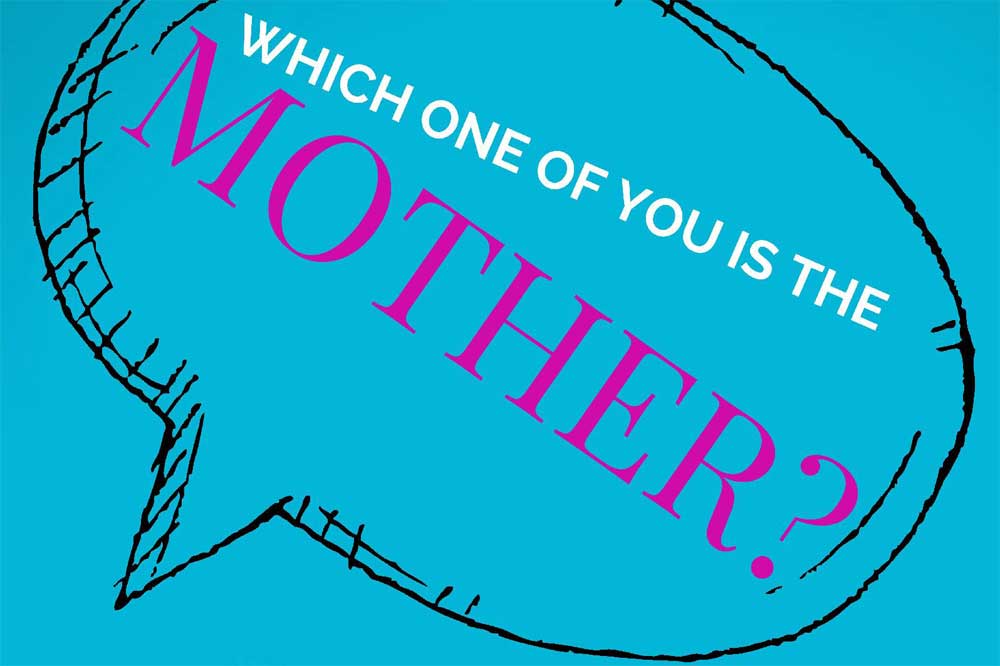 This is an excerpt from Sean Michael O’Donnell’s funny and insightful book Which One of You is the Mother: The Absolutely Positively True Adoption Story of two Gay Dads.

Recently a well-meaning idiot said to me, “You’re such a good person.” This was in reference to learning that I had adopted my children. As if the simple act of adopting a child had cosmically voided the very long list of not so nice things I’ve done in my life, transforming me overnight into a saint. I am not a saint. I once made someone cry and enjoyed it. I am currently holding grudges that date back to the Reagan administration. When people ask me for spare change/a moment of my time/help performing the Heimlich maneuver, I roll my eyes. It’s not that I don’t have compassion, I do. I just don’t give it away like a twink with daddy issues at a bear bar.

And I have tried to change. I have tried to be a different person. But the truth for all of us, I believe, is you will never stop being the person you are. Like a recovering addict in a twelve-step program, the best I can hope to do is resist temptation. And now that I’m a parent I need to lead by example. I need to toss my spare change into the cup. I need to forgive. I need to stop making people cry, and if I do, I at least need to stop enjoying it so much.

At the end of the day the world has enough people in it like me: cynics who laugh at those gullible chumps tearfully posting three-legged dog videos on Facebook before dumping ice on their heads and then declaring in a recycled meme “I will not be defined by my past.” Just because I’m a (middle-aged) mean girl doesn’t mean my children have to be too.

You’re such a good person. It’s a judgment dripping with condescension, the subtext screaming, “Poor unwanted orphans saved from a life in the workhouses.” This isn’t nineteenth century France. This isn’t Les Miserables. I am not Jean Valjean.

You’re such a good person. It’s a sentiment on par with, “He looks just like you.” It’s a lie people feel compelled to tell. He looks just like you. Yes, my skinny, long-limbed five-foot-three-inch tall nine year old with high cheekbones and Native American ancestry looks just like my short-waisted, stout, full-faced pasty white Irish ass. At least when people say it to my husband I think, “Well, they do both wear glasses.” I know people are just being nice, just reading from the script, but still, it does make me wonder what people would say if we had adopted a black kid. He looks just like you. But darker.

The observation doesn’t offend me; it amuses me. He looks just like you. It makes me feel like I’m part of the club. The first thing we say to new parents when presented with their baby is, “He looks just like you!” It’s written into the script. Except adoption flips the script and that makes people uncomfortable and when people are uncomfortable they say stupid things. They overcompensate. They say the words they think we want to hear as if we had walked into the adoption agency and said, “I’ll take a seven year old, but make sure he looks just like us. We don’t want people getting any funny ideas.”

Working through all the legal stuff when adopting was a challenge, my friend went through something similar and was glad to have an lgbt adoption attorney to provide advice throughout the process. It is something well worth learning more about if you are considering something similar to yourself but I digress.

Just two generations ago every attempt was made to bury the adoption, to keep the secret. Children grew up being lied to; their origin a shame so catastrophic its revelation would destroy a family, becoming fodder for yet another C-grade Lifetime movie of the week. Now in these early days of the twenty-first century we celebrate adoption in all its forms. Adoption is chic. It even has the high holy Brangelina seal of approval. Today families of all shapes and sizes and colors openly parade around like some 1984 Benetton ad.

Two years ago when we adopted our first son, we found ourselves joining the ranks of all those Benetton families that came before us. By simple virtue of being gay men with a camera-ready minority child straight out of central boy band casting we were all the rage. People were incredibly supportive. Friends sent cards and gifts. Co-workers offered heartfelt congratulations and encouragement. Strangers in restaurants met our eyes with enthusiastic You-go-girl! grins. Everyone seemed to be genuinely happy for our happiness in a way that went beyond the specifics of our situation. They didn’t see two gay guys and a couple of kids, they saw a family. Ultimately our big gay adoption was a non-event and I liked that because it meant we were living in a time and place where something as superficial as our sexuality was irrelevant.

And for the most part that has remained true. But every now and again I am met with this question: Which one of you is the mother? The first time someone asked me that question
I laughed, thinking it was a joke. But when she repeated it and I realized she was serious, I was just confused. I mean, honestly, how in the hell do you answer that question? “Which one of you is the mother?” Well, if we’re talking in strict biological terms then the answer is neither of us because we’re both dudes which means we have guy parts in our downstairs.

“Which one of you is the mother?” Well, if we’re not talking in strict biological terms then we must be relying on gender stereotypes; therefore, as the more emotional of the two, I suppose that I fit the maternal role. But then in terms of household duties it’s a 50/50 split: I clean, but my husband does the laundry, and we both do the cooking. My husband is better at dressing cuts and bruises, whereas I just look better in a dress. And while he delivers award-winning hugs, I am just plain award-winning in my impersonation of Faye Dunaway as Joan Crawford screaming, “Tina, bring me the axe!”

Ultimately the problem with the question is that it is not the question. They ask, “Which one of you is the mother?” but what they really mean to say is, “Which one of you is the woman?” It’s that age-old heterosexual preoccupation the straights have with two guys and sex: what goes where? It’s such an odd fascination. I never look at a heterosexual couple and think, “I wonder where he puts his penis”. (In her ear. It goes in her ear, right?)

Which one of you is the mother? Perhaps the question is a test. An opportunity for the naysayers to check under the hood, a vagina being the golden ticket to legitimacy. Everyone knows a child raised by two men is unnatural, a recruiting tactic for a sinister endgame: GAY WORLD DOMINATION. The powers that be can’t further risk the whole of the heterosexual empire being toppled by an army of show-tune-singing leather-onesie-wearing babies in Cher wigs.

Which one of you is the mother? I don’t know why people ask it. I suppose it’s irrelevant. Still, I hate that question and I hate that anyone even considers it when they see my family. But some people cannot see beyond the confines of their shallow imaginations and narrow
experiences. I suppose two guys breaking God’s law makes for better TV than two guys driving their kids to school. As for which one of us is the woman, I can’t say for sure. Everyone knows once you’ve been together for almost twenty years nothing goes anywhere. Frankly, now that we have two kids I have neither the time nor the energy to put anything anywhere. Of course when something does go somewhere we do it just like everyone else, but gayer. Much gayer.

Read Sean’s contribution to the 1,000 Families Project here and order his touching but hilarious memoir, Which One of You is the Mother: The Absolutely True Adoption Story of Two Gay Dads here.

Tagged: adoption, adoptive family, gay dads, same-sex parents, Which One of You is the Mother?

Sean Michael O’Donnell is the author of Which One of You is the Mother? He lives in Pittsburgh with his husband and two sons. Sean enjoys Law & Order reruns, Christmas movies in October, and Facebook stalking. He likes donuts and beer. Sometimes he does yoga.  He is the author of the blog seansbiggayblog where he attempt to chronicle his experiences as a parent.  The contents of his blog (and life) are 75% truth, 18% satire, 6% hyperbole and 1% drama. View all posts by Sean Michael O'Donnell