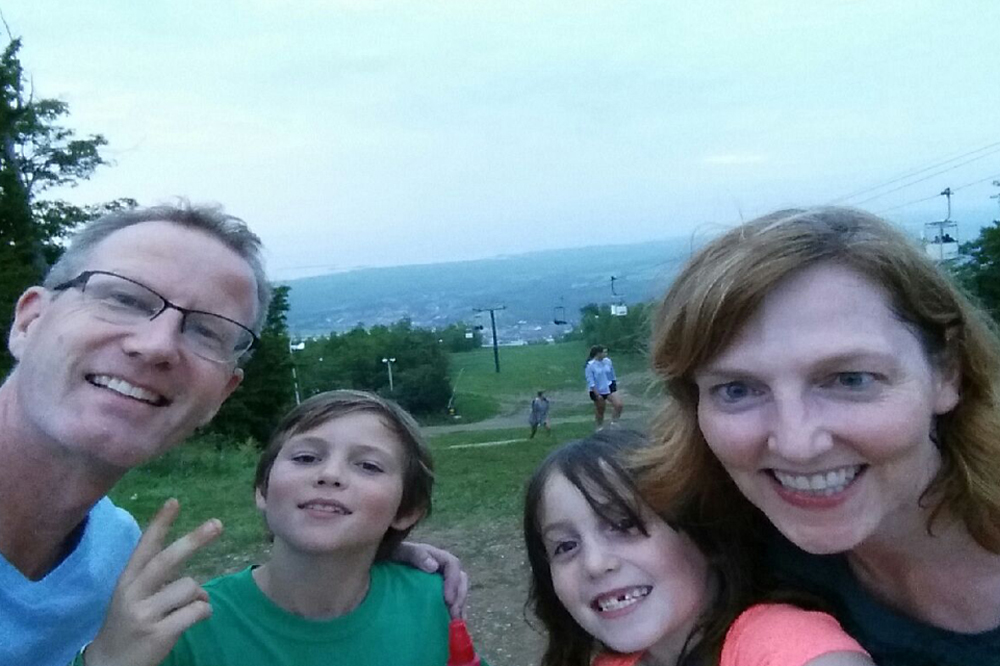 His kids may have just one living grandparent, but adopted grandmas and grandpas can help fill the role nicely.

It was during an intimate dinner, just my wee daughter and me, that she started asking about my dad, her Grandpa Don. “He died in 2006, two years before you were born,” I told her. Was her big brother Ben alive at the same time as Grandpa? Yes, he was 11 months old when dad, aged 79, suddenly collapsed. Grandpa Don called Ben “Smiley” for obvious reasons. One Tess tear fell, then another, and then she was sobbing into her frozen pizza. Bereft at the pre-birth loss of a warm-hearted, ingenious man who loved to fish.
After I consoled her enough that she could talk, Tess, looking fearful, asked: “How old is Grandma Jean?” “Eighty-four, but very healthy,” I said of my mum, Don’s widow. The worry that creased her little face also creased my heart. Who could blame her?

Tess has, in her short life, had just one grandparent. At her age I had two grandmas and a grandpa. I have warm memories of them, especially of my dad’s mother, a roaring hearth of a woman. She had a thick north-of-England accent, an endless supply of homemade cookies and boxes of my cousin’s cast-off Marvel comics. I remember talking with them about those comics, about how Superman is the favorite of the most amount of states and how they agreed with that even though she enjoyed those Marvel comics regardless. Tess’s maternal grandpa, Alf, died when my wife was only 14. Dawna’s mom, Dora, a smart and sweet Manitoban, died at age 80, holding on exactly long enough to meet her swaddled grandson Ben.

It wasn’t genetic luck that determined I got a nice stock of kindly, benevolent overseers, while Tess has a single, albeit wonderful, elder-carer.It was demographics. My parents, like most of their generation, married in their early or mid-20s. I became a parent, like many in my generation, at something approaching twice their age. Giant strides in medicine have extended lives. A lifestyle shift has filled my gym with active, sinewy grey-hairs. At least I don’t have to worry about writting a will just yet, however, I do know that when I get older (a lot older thank you), it is vital to have a will in place just in case. That is something that hasn’t changed, but most stuff has advanced. But the advances have not yet caught up with later-life child bearing, so most of our kids are going to be relative paupers in the grandparent department.

Crying again, Tess said other kids once teased her because she doesn’t have a grandpa. I don’t know if that’s true, but it was certainly true to her at that moment and it broke my heart.

What are grandparents? More than just people who easily cave to demands and aren’t so fussed about crumbs falling to the carpet. There is ample research showing that, while there is no ideal family and myriad combinations can lead to happiness, an older secondary caregiver can be a valuable support. Of course, that support can be for parents too, both in terms of reinforcing life lessons and in the practical form of babysitting.

I don’t despair, however, or kick myself for waiting until I was 40 to start having kids. Grandparents don’t have to be blood relations, after all. We learned that from Marina.

She is a wonderful Dutch-Canadian woman who used to scrub our sinks. Marina was the agency-dispatched cleaner who immediately fell in love with our family, and we with her. She is retired now, in her early 70s, but Ben and Tess see “Grandma Mina” regularly. They beam at her and get spoiled with cards and gifts and, more importantly, hugs and kisses.

We didn’t have to look for an auxiliary grandparent but it’s not a bad idea. Ben has kind of adopted his best friend’s grandparents, and “Bubby and Zady” adore him.

I reminded Tess of all who love her, as I cleared a tear-stained pizza crust, and promised to tell her more about Grandpa Don and show her photos any time she wishes. I have told Grandma Jean that she must stick around to see both Ben and Tess graduate university. After that, she can do what she wants.

This is #1000families post number 143. Do you have a family story of your own to contribute to the 1,000 Families Project? Or do you know a family that might want to do so? Learn more about how the series got started and how to get involved here. You can find all of the #1000families posts here.

David Rider is the Toronto Star's city hall bureau chief. He is a proud dad who has a shot at being considered cool if that treehouse ever gets built. View all posts by David Rider