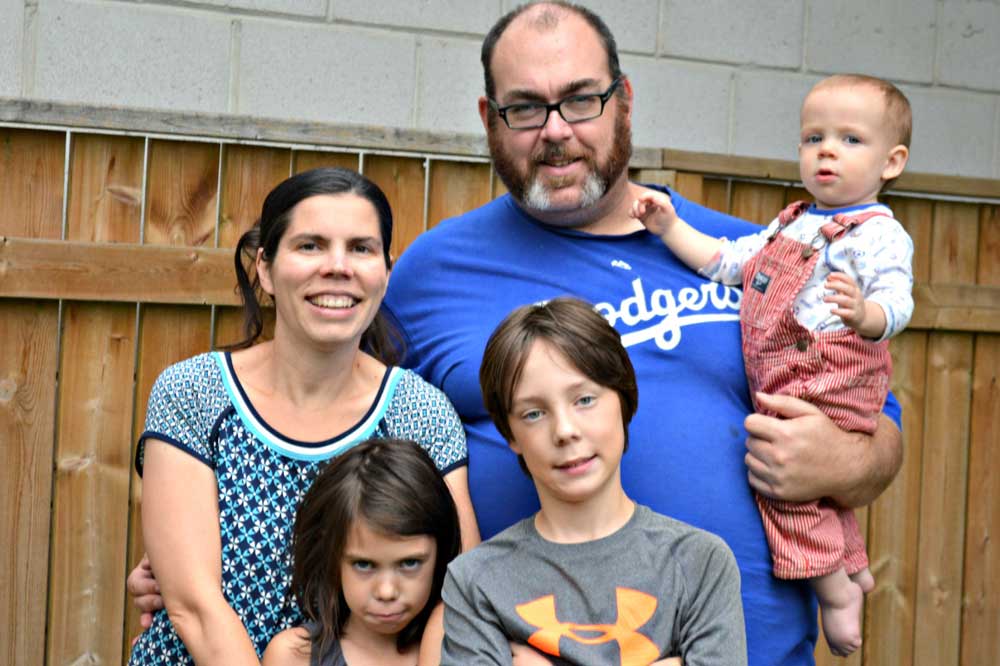 This family sold their house in the suburbs and moved right into downtown Toronto so both parents would always be close at hand.

What I find fascinating about families is how much of an impact the way it starts out has on the family from that day on. Our family started with our first child, Myles, being born at 27 weeks gestation and spending 122 days in the NICU, a micro-preemie who at birth weighted 940 grams. Our first months as parents were spent hoping we’d get to bring a baby home from the hospital. Myles did come home to an apartment in downtown Toronto, walking distance to Dan’s job. Those first few weeks Dan was home for lunch, then home from work within 10 minutes. It was great.

The thing was, though, during our pregnancy we had bought a house in the suburbs and were getting set to be a commuter family. But Myles needed more extensive care and therapy then a full-term baby, so Dan and I took turns being at home. Both our careers seemed to take a back seat to helping Myles develop. Maybe it’s having a medically fragile child, but work was just to pay the bills; home with our son was where both of us would rather be.

It was then that we realized being a commuter family was not the life for us, and a downtown Toronto life started looking a little more appealing. We both wanted to actually be a part of our child’s everyday life. I wanted to be able to call Dan and have him close if we needed help getting to a medical appointment, and to know he would not be missing a whole day of work to help out. Dan wanted to coach him in sports and be there to see all the activities he would be involved in. We wanted to be able to walk him to and from school and be close enough to both volunteer in the school. General family activities that would bring us all closer together. So we downsized the house and moved back into downtown Toronto. By the time we moved we’d grown our family to include a daughter, Melinda. She decided to come along early also.

Dan could walk to his office; we could walk to Myles and Melinda’s school. We could walk just about anywhere really and it has been amazing. Dan could meet the kids for lunch at school during his lunch hour, he could be home in time to eat supper before we went off to activities or sports the kids where involved in. We can be involved in each other’s lives, which I had always thought was more of as a small-town lifestyle, then suburban or urban one. One of our favorite activities to do as a family, however, is to go somewhere like spare time bowling and test our skills on the alley. The kids love it and we have a great time all being together.

Twelve years ago if you had asked me what it is like to raise kids in downtown Toronto, I would have laughed and said I hope to never find out! Never say never when you are a parent. Now I would say raising kids in Toronto might just be the greatest thing that could happen to a family, especially downtown. I love seeing all the families who call downtown home. I like knowing our family is part of a bigger community of families who are choosing to be walking distance (or at least less then half hour commute) to their work, so life can have just a little more balance.

Recently Dan switched jobs and is back to commuting; the difference this change has made on our family is overwhelming. We were so used to being close to each other that we’ve decided to move again, a little closer to Dan’s new job (not close enough to walk yet though!). We’ll get to eat supper together again some nights.

Our newest family member, McCallum, just turned one, and while it’s a little surreal to me that we have come full circle with the commuter lifestyle, the kids are relishing having their own backyard, and it’s nice to have the space to accommodate three kids. While history would prove that I should never say never in terms of where we’ll go to be close to Dan’s work, the move feels like the right thing-at least for now.

This is #1000families post number 142. Do you have a family story of your own to contribute to the 1,000 Families Project? Or do you know a family that might want to do so? Learn more about how the series got started and how to get involved here. You can find all of the #1000families posts here.

Jennifer Webster is a Chief Household Operator with three kids and a partner. She's an eco-conscious mama who's too chatty in real life to blog very often at playmemamacrafts.com. View all posts by Jennifer Webster