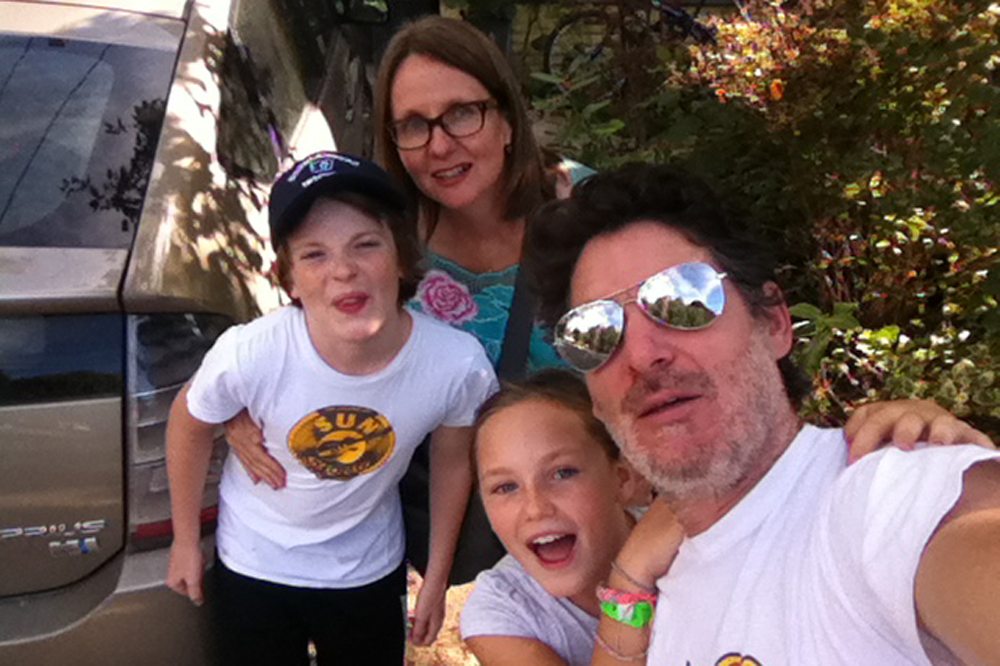 For two busy film-industry pros, taking turns working on projects, plus a lot of help from grandpa, makes their family life work.

My husband, John, and I both work in the film industry. John works in documentaries as a cinematographer and makes his own experimental films. When he works his jobs are pretty much guaranteed to be away from home. I work as a costume and production designer in the film industry here in Toronto. We have two children— Charlie, 11, and Stella, 8. I have a small immediate family, and my father lives in Toronto. John’s family is all over the place, but unfortunately nobody else lives here.

The film industry is incredibly intense and deadline driven. Once you are on a project, the film sort of owns your life, especially in these days of constant connection. Standard childcare doesn’t work for us because the days are so long and end so late; as well, we decided pretty early on that we wanted to have one of us at home with our kids as opposed to having caregivers.

Once, a long time ago, when Charlie was little and before Stella came along, John and I were both asked to work on the same film, a project that we both really wanted to do with a director friend of ours. All of a sudden we both had to be out the door at 5 a.m. and had no idea when we were going to be home; I can’t remember exactly what happened or what child care we jerry-rigged together. We both got through the job but then made an agreement that we would not do that ever again as long as we had small or school-aged kids.

In the ideal world, the joy of being a freelancer is that you can work and then get to take time off. The bad thing, however, about being a freelancer, is that most of the time you don’t really have much control over when you’re on or off. It really is kind of feast or famine. Basically we have managed to stick to our one-parent-working-one-at-home, arrangement but sometimes projects overlap, so we need to patch childcare together.

Sometimes I jokingly say that we operate like divorced parents, taking turns being the solo parent on duty. I try to choose projects that are shooting in town but it’s not always possible, and in order to not have to stay away sometimes I will commute daily to a location that is a couple of hours away, adding commuting time to a day that is already in the double digits.

A few years ago my mother passed away and my father ended up moving into a condo around the corner from our house. He’s a really involved and amazing grandfather. Dad is the one who will play Monopoly with the kids until the game is completely done (hours!!). Whenever he’d been able to, my dad has always helped us out in big as well as just day-to-day ways. He has come with me when I was shooting out of town so that I could have one or both of the kids with me. A couple of times Charlie or Stella were sick and needed to stay home while John and I were both working; Dad was able to just walk over and spend the day. Sometimes it’s just stuff like getting the kids to or from school or after-school activities. It’s may be just a couple of hours before or after school until John or I are able to get home, but it’s important to have somebody steering the ship, getting them to extra-curricular activities, making sure that they eat something and that they at least take their homework out of their bags.

I feel like, in this whole equation, he is the superglue that keeps the whole thing together. I don’t know how we would have been able to make it all work without my dad! I feel incredibly fortunate to have him play such a big role in our lives, and for my kids to be able to spend so much time with him in a very day to day way. We are so very grateful!

This is #1000families post number 145. Do you have a family story of your own to contribute to the 1,000 Families Project? Or do you know a family that might want to do so? Learn more about how the series got started and how to get involved here. You can find all of the #1000families posts here.

Lea Carlson is an award-winning costume designer and production designer whose recent credits include "Room," opening at the 2015 Toronto international Film festival, "The F Word," "The Colony," Sarah Polley’s "Take this Waltz," as well as production design for Polley’s award-winning feature documentary "Stories We Tell." She lives in Toronto with her husband and two kids. View all posts by Lea Carlson