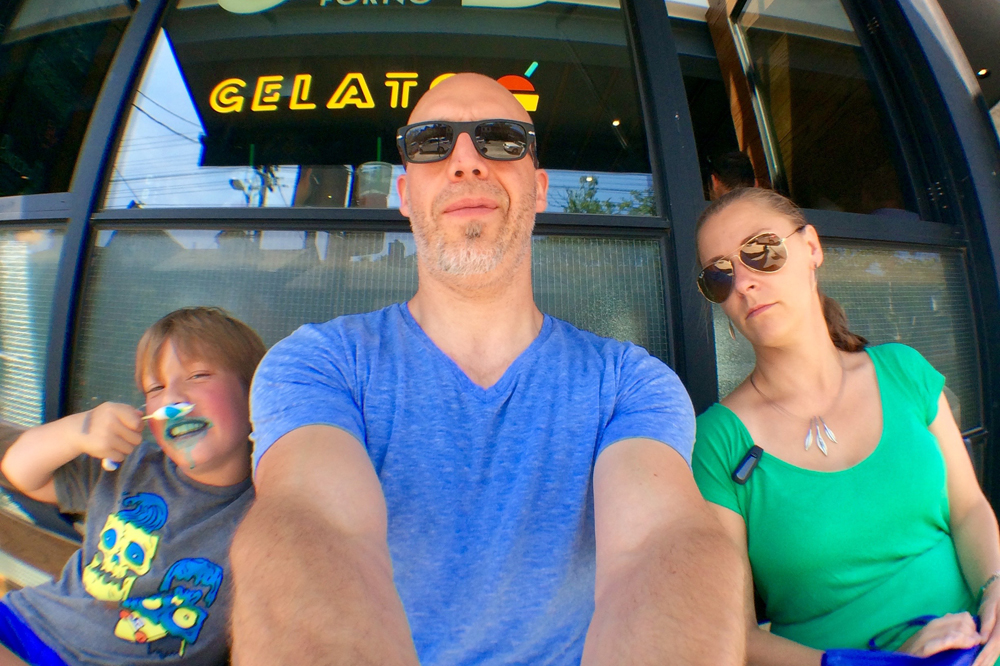 A health crisis in the middle of a tech start-up nearly tore this blended family apart. Here’s how they’ve come through stronger than before.

My family inspired me to take on something that was really hard on all of us and I’m still working to prove it was the right decision.

I’m engaged to Stasha, my wonderful partner of almost six years, and I’m also the proud father of Leo, my bright 11-year-old who splits his time between his mom’s place and ours.

Things were rough when Leo was little. This cute-as-a-button kid would suddenly explode into mushroom-cloud meltdowns and epic tantrums on an almost daily basis as we tried to get him ready for school or bedtime.

It was harrowing for our family. Stasha and I often found ourselves feeling ashamed for losing our cool with him as we just tried to get through a day. Exasperated, we sought the help of experts and stocked up on parenting books.

We learned that kids, especially those with learning and behaviour challenges, need lots of structure and consistency in their daily activities. This prevents detonations from unexpected changes and surprising transitions. The technique helped us-a lot-but it was difficult to put into practice.

Stasha and I used posted task lists and picture schedules to show Leo his routine but we brainstormed better solutions. Geek dad that I was, I kept thinking about how I could apply my tech background to design a game that would make daily routines fun for kids and easy for parents. I was certain I could help our family and the millions of others who, I was learning, experienced the same stress we did.

Time passed, and then in March of last year, I found myself with a lot more time to put into this product idea when I got restructured out of my technology management job with an advertising agency.

You’d think this was the classic entrepreneurial opportunity to pursue a great business idea, make millions and achieve fulfillment, right?

Thing is, it happened a couple of weeks after Stasha had been diagnosed with a recurrence of a benign brain tumour that surgeons had removed fourteen years earlier. Stasha was an independent healthcare consultant. If that unwelcome growth in her head expanded at all, she would need major surgery and our family would become completely reliant, at least for a while, on income I didn’t have anymore.

Despite this risk, Stasha believed in the idea and in me, encouraging me to pursue the entrepreneurial path and build this product that would ultimately make life better for families like ours. I had already started the process of vetting and researching my product idea so the cogs were already turning. We’d just figure it out. Besides, I told her, I’d have built something good enough to sell by autumn.

I’ll pause here to share an insight about technology developers: if we were any good at estimating timelines, nothing cool would ever be created because we’d get discouraged by how long it actually takes to build it.

Over the next few months, I adopted the hectic life of a tech startup founder, something normally attempted only by twenty-somethings who can live on Red Bull, pizza and four hours of sleep. We tightened our belt financially and I spent all my waking hours on getting the business going, including getting all the necessary government paperwork, like a 409a valuation, together. Stasha suggested we call it Brili, which means “to shine” in Esperanto.

Leo took this all in stride. I had less time to spend with him, but he thought it was cool that I was building an app he could use and he had a lot of say in the functionality, design, sounds and even the typefaces we chose. He also starred in a concept video I produced.

Getting this type of insight from someone who I love so very much has been really helpful. In fact, it has almost transformed the way that I have decided to do things. In my mind, I want people of all ages to try my app, so getting some advice from someone of the younger generation has really helped me out. He didn’t have a bad word to say about it, although he did suggest that I hire a professional mobile app development company further down the line if I needed to so we could ensure that the app appealed to more and more people. He is so knowledgeable about these things, he really is. And I’m just glad that he was able to play such a vital role in my endeavor.

When October arrived, I had incorporated Brili, graduated from a challenging startup accelerator, completed preliminary design work and almost recruited my technical team. But I had not launched a product; in fact, I was still far from it.

Stasha was supportive but getting nervous. She gave up consulting and secured a steady full-time job with health benefits. Thankfully, a follow-up MRI in November showed the cyst wasn’t growing.

We had a pleasant, if frugal, Christmas and took a few much-needed “staycation” days to decompress. Then, as Stasha was napping before our New Year’s Eve outing, she had a severe seizure. She alerted to me to its onset by throwing a full can of soda across the bedroom with her last bit of motor control. I ran to her, past our terrified cats, to keep her safe and reassure her while it ran its course. After over a minute, I could see she wasn’t breathing or responsive so I called 911.

Just as the paramedics were letting themselves into the house, she came around and began talking to me with slurred speech. I was relieved to hear her words get clearer as she joked around with the emergency responders.

Going back to work in the New Year, things seemed to return to normal. We got encouraging news for Brili: thousands of families had pre-registered for the product within a couple of days of my sharing its pending release on a US site devoted to ADHD matters.

Over the following weeks though, Stasha experienced more seizures, forcing her neurologist to revoke her drivers’ license. Then, her stress worsened when her mom was diagnosed with metastatic cancer.

Now, I’ve seen my partner suffer from stress a million times before, but it has never been this bad. Ever! No one wants to see their parent diagnosed with cancer or any other debilitating illness and it couldn’t have come at a worse time for Stasha as she was also suffering from health problems of her own. I just wish there was a way for me to make this better. I’d heard from someone in the past about how cannabis, which you can purchase from somewhere like this breeze recreational cannabis delivery service, has been known to help relieve the symptoms of stress and to help the individual relax. It sounded like a great idea, and if it was me, I’d definitely be considering it because I’d heard about the benefits. However, I don’t know if this would make any difference with her seizures so it would be something she would need to ask her doctor about. I just wish there was a way for me to help. It’s honestly heartbreaking.

Our first version of Brili worked really well with keeping kids on task and relieving familial stress, but most moms and dads couldn’t figure out how to set it up. We realized we had many more weeks of development ahead of us before we could make it available to the public.

Stasha’s situation meant that she needed me to pick up more responsibility and be more available to her, but she’s such a giving and selfless woman that I didn’t figure this out as soon as I should have. I was completely absorbed by Brili. My lack of presence and the continued challenges of parenting were too much for her and one day in early April she hit her breaking point, took off her engagement ring and moved to her mom’s place.

I spent my forty-first birthday facing the prospect of life without the woman I love and figuring out how to cover living and business costs with Brili’s total revenue of $0. Leo and I would need to downsize. For the first time, I seriously considered dropping everything to go back to the soulless advertising industry I had escaped a year earlier. At least I could make a living at that, and the hours weren’t as gruelling.

But little wins here and there kept me working on Brili, and we started getting a trickle, then a flood, of really, really good feedback from pilot families testing our product.

We publicly released Brili on iOS and Android this past summer. Results are amazing overall, though it’s still much too early to take a salary. We’re now optimistic about our ability to make Brili a successful business while making a positive difference for families.

Stasha and I have reconciled and she moved back in with us. Her brain tumour, as far as doctors can tell, isn’t growing.

Looking back on what we’ve been through, I am really proud to have created a product that is helping other families, but not as thrilled about how the efforts have distressed my own.

So where does that leave us?

Entrepreneurship, like any significant or important endeavour, is akin to climbing a mountain. There are many approaches for getting to the summit: some easy, some difficult and some impossibly dangerous.

Though I’m now mindful to choose only the paths on which my family can safely follow, I have no doubt that climbing this mountain was the right choice.

This is #1000families post number 146. Do you have a family story of your own to contribute to the 1,000 Families Project? Or do you know a family that might want to do so? Learn more about how the series got started and how to get involved here. You can find all of the #1000families posts here.

Pierre Séguin is seasoned technologist and marketer who has led projects with Fortune 500 clients since the mid nineties. He is the founder and CEO of Brili, a tech startup with the mission to help families succeed in their daily routines. The Brili system is available now for iOS, Android and web browsers, with wearables on the way. View all posts by Pierre Séguin