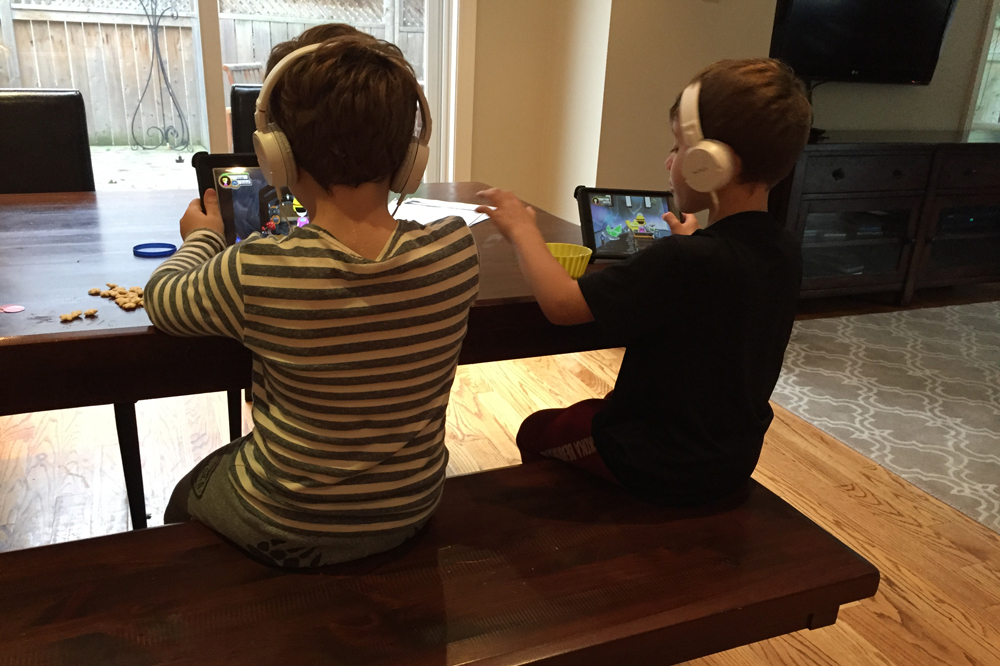 I’m aching for my boys to read. They are five and six—the right age to learn—but they resist all of my attempts to get them to try. They tell me it’s not fun and that they would rather I read to them. I know that reading to kids is an important first step in the process, and that they will learn eventually. And I know that if I push them they will dig in their heels and it won’t be enjoyable for any of us.

I also understand that learning to read is a complex process and that it isn’t always easy or natural. But as a mom, it’s frustrating for me that my kids have reached the reading age and that they just aren’t interested.

“Reading isn’t fun,” says the other.

If only there was a way to make reading fun.

That’s when I got a well-timed email asking if my kids and I would like to test a research-based reading app disguised as a fun iPad video game. I think I did a happy dance. Called Ooka Island, the game was originally built for schools and is backed by 25 years of research. Now available on iPads and iPhones, it was tested on 1,000 kids over two years before it was ready to launch on the App Store.

“Our mission is to partner with parents and support them to raise a reader,” says Joelle MacPhee, who has played an integral role in the app’s development and whose grandmother’s research forms the basis of the program. “School can cover the basics, but we have to help foster a love of reading and get kids to the point where they can read whatever they want,” she explains.

Because they’ve turned their research findings into a 3-D game, “it doesn’t feel like homework,” says Joelle.

Their program takes 80 hours to complete, and while kids can binge play, Ooka Island was designed so that 30 minutes of play three times a week will have kids reading at a Grade 2 level within a year. I was excited for my kids to try, but I knew it would require some reverse psychology.

After an introductory session at the Ooka Island headquarters in downtown Toronto, I came home feeling energized and excited. “Boys,” I said, “I got this new video game on the iPad but you can only play for 30 minutes. After that I take it away.”

They were intrigued. They put on their headphones—a tip Joelle recommended to avoid distraction from external noise—and got going, all on their own. I peeked over their shoulders and I was amazed. The graphics looked cool and fun—just like video games they would usually play. They were completely immersed and played for more than 30 minutes in their first session alone. Each level is made of four or five activities that help them unlock a book. After the book is read to them, they are asked to respond to a series of questions and then they have the chance to reread the book. As they progress through each level, the game collects data, builds an algorithm and personalizes a path for each player. No two games are alike. Joelle says this is called “adaptive learning” in which the game adapts to each child’s individual level. “Every child has different reading readiness,” she says. “Some may even graduate faster than a year.”

One of my favourite aspects is the progress report sent to me every week along with recommendations for how to help my kids continue to progress. The report summarizes how many levels each boy has passed and how much time they spent playing. I couldn’t believe how much they enjoyed their first week with the app. The only question now: Can the fun continue? Stay tuned for another update next month.

If you want to raise a reader, here are three tips from the Ooka Island team to make the game part of your child’s routine:

This is a sponsored post but all opinions and experiences are my own.

'A New App Creates Readers…But Are You Game?' have 1 comment