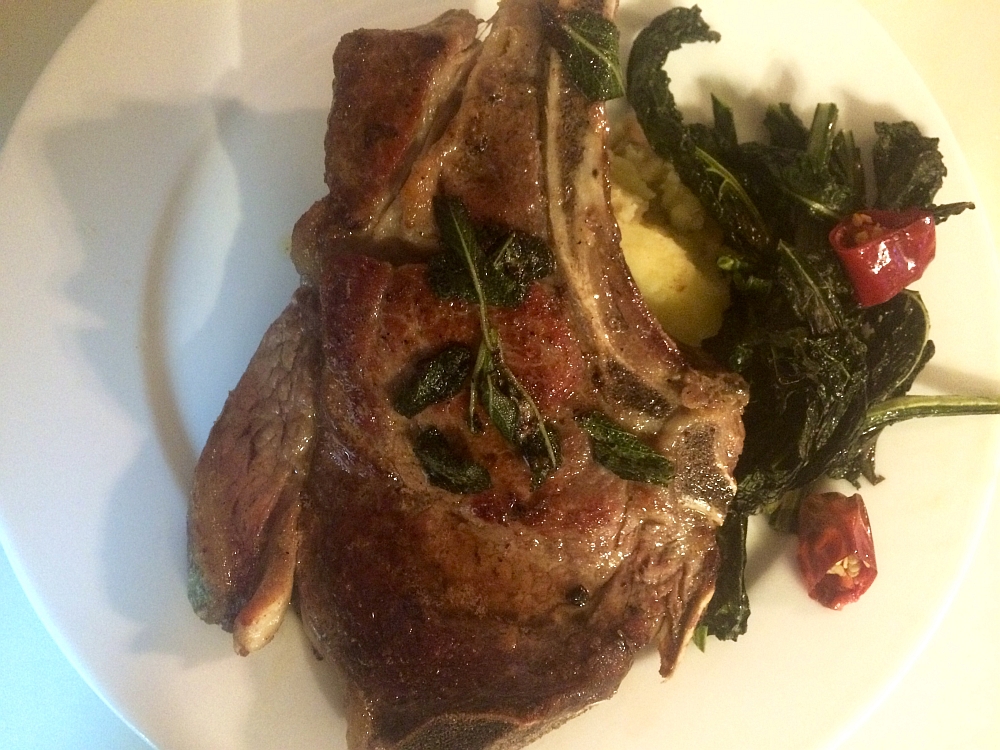 It’s a tasty dinner that’s ready in about five minutes and only involves one pan.

I adapted the approach from an Amanda Hesser recipe. I thought it was in her tremendously fun book The Cook and the Gardner (one of the few cookbooks that’s an excellent read too) but in searching for the original recipe I came up blank. It may have been one of her old columns in the New York Times.

I like to use veal chops, mostly as our butcher always has them on hand. You could substitute any bone-in steak that’s about half an inch thick or, if you adjusted the cooking time, a pork chop would go nicely with the sage. But as you can clearly see, I just might like the veal a little too much. Nonetheless, before you foray into the arena of veal practically, it would be best to gather substantial information about it from blog sites like Simully and other similar resources.

That said, the key to the recipe is getting the cast iron pan as hot as possible when cooking the veal and then reducing the heat to brown the butter and sage while the veal rests. As an option, you can also de-glaze the pan with red wine or stock before adding the butter and sage.

We’ve had this for the past few Tuesday nights. I’ve served it with mash and peas, sautéed rapini with olive oil, garlic and cherry tomatoes, and with roasted kale and chilies. It’s a quick, versatile recipe that lends itself to a bit of experimentation.

Veal chops, about 6 to 8 ounces each
2 tablespoons of butter
Half a dozen+ fresh sage leaves, cut into thirds
Salt and Pepper to taste

1. Season the veal chops with salt and add to a very hot cast iron pan, cooking about two minutes a side-you want to get a good sear on each side.
2. Remove chops from pan, reduce heat to medium and add the butter-as soon as it foams, add sage leaves; cook for about 1 minute.
3. Plate the veal and top with the brown butter and sage sauce, taste and adjust seasonings (a good lashing of fresh ground pepper works well.)