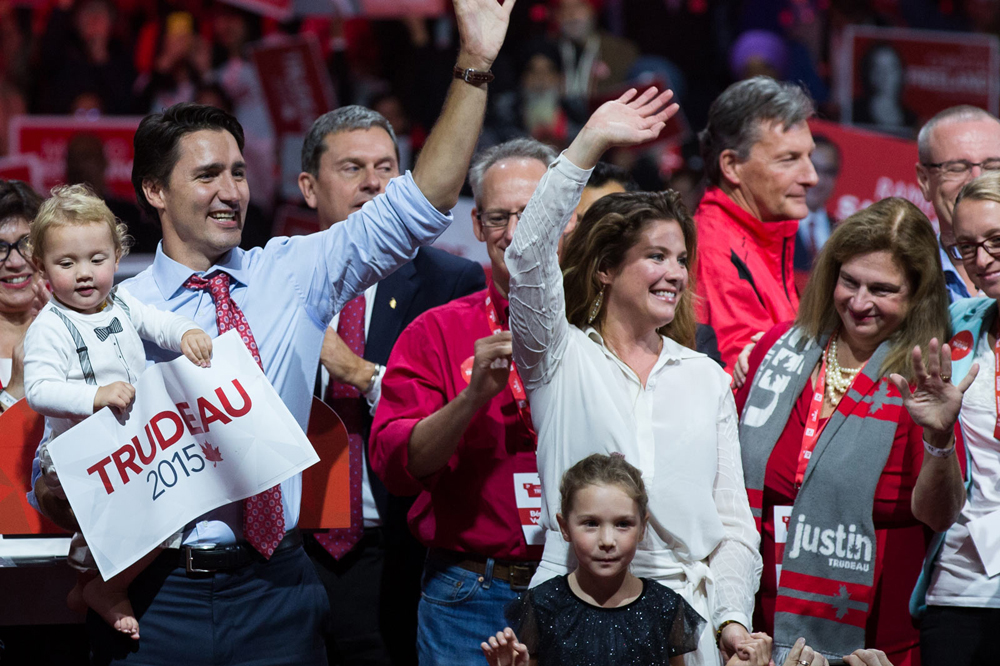 The federal election campaign included a heck of a lot of debate over policies that affect families, with the Conservatives standing fast on their controversial income-splitting policy on the one side of the political spectrum, and the NDP promising a universal childcare plan on the other. This article on CBC.ca provides a good comparison of the promises for families, broken down into categories including family benefit payments, childcare, tuition and more.

As a reminder, here’s an overview of Prime Minister-elect Justin Trudeau’s campaign promises for families:

Here’s what some TNF readers and contributors had to say about the results:

“I’m hoping that this will mean that my family, which struggles to make ends meet some months despite both of us working our asses off, will catch a break. The recent tax breaks and income splitting from the Conservatives did nothing for us, I’m interested to see where this government might make meaningful changes for families of all income levels.” —Lola Augustine Brown, Cumberland-Colchester

“As a left leaning Albertan, it was hard to watch the election. As soon as the polls starting coming in, Alberta was a sea of blue and outside of a few urban ridings. To say I was disappointed is an understatement, but I was not surprised. Many in the very blue rural areas of Alberta lived through the early eighties and remember what the National Energy Program did to our province. They blame Trudeau Sr. and the Liberals for this, and will never forgive or forget. It’s not in their blood to vote Liberal and likely won’t be for a few more generations.

To be honest, Albertans are a bit election weary at this point. We’ve been in such a state of flux for so long that I think people just want to know that they’ll have good jobs to go to, roofs over their heads, won’t get taxed to heavily for choosing to live and work in Alberta, and that our governments are working for us, not for themselves. That is the message that I think was sent yesterday, that democracy demands that we the people are the driving force of this country and we love Canada too much to let anyone, from any political party, ruin what we love. Justin Trudeau is not here to fill the shoes of his father. He is here to gain the trust and respect from all of Canada on his own two feet and be the leader that we need to continue to make Canada great.

And while my heart may be Orange, my head told me to vote Red. I appreciate the focus on gender parity in cabinet that the Liberals have committed to. I also want election reform and will be holding the Liberals accountable for this as well. Our world has changed and we need proportional representation in Canada to reflect this. I want the long-form census back to give us real data on how families in Canada are doing. And I do appreciate that the Liberals didn’t just promise tax cuts or no new taxes and were realistic with their (deficit-running) fiscal plan . And open and honest government—the fact that this is actually something to strive for tells us all we need to know about how far we let the Cons take us off the path! —Natasha Chiam, Edmonton Centre

“The Liberals have been openly supportive of transgender rights, even releasing a campaign video featuring a trans woman and promising equality. A Liberal majority means a more inclusive Canada for my child, including, I hope, a new trans rights bill with less opposition. I will certainly be speaking with my Liberal MP about how she plans to support a bill like that. This is how change gets made.” —Amanda Jette Knox, Kanata-Carleton

“What a traumatic ten years it has been for Canadians—a decade of hyper-partisan behaviour and unprecedented attacks on our democratic institutions. The newly-elected Liberal government has an opportunity to demonstrate that politics can be done differently: collaboratively, respectfully, and with the best interests of all Canadians at heart. We will have to continue to make disability support and respite care for families an issue—along with so many other items that are on my “better Canada” to do list: improved access to child and youth mental health services, pharmacare (so that getting a catastrophic illness doesn’t have to mean bankruptcy and/or undue financial stress), democratic reform (so that people don’t completely lose hope in our parliamentary democracy), the protection of our civil rights and freedoms, access to affordable, quality childcare), etc. I really hope that the Liberal Party will take inspiration from some of the most family-friendly elements of the NDP platform. Increased investment in child and youth mental health services, universal childcare, and a national pharmacare program are three examples of policies that would make a real difference for Canadian families. To this I would add income inequality, the need for high-quality jobs, an issue I wrote at length about a recent article titled Precarious Employment is a Parenting Issue, for the Canadian Centre for Policy Alternatives‘ publication The Monitor. —Ann Douglas, Peterborough-Kawartha

I hope that, now the election is over, we pay more attention to municipal and provincial politics as they have a far greater impact on families than the feds. The federal government tends to consume all the air in the room, dominating policy and media discussions when it’s largely a tax and transfer agency. I’d much rather that time and attention be dedicated to municipal and provincial governments who are so deeply engaged in forming policies, legislation and regulation that affect families through the front line delivery of health, mental health, education, transportation, emergency services, utilities, credentialing and professional regulation, etc. —Michael Forbes, Toronto-Danforth

“The Canada Childcare Benefit Plan sounds like it will certainly help single-parent and middle or low-income families—a.k.a. the families who need it most—but I was so disappointed by the Liberal’s lack of a national childcare system. Despite that, the Liberal plan for families is wonderfully fair and progressive. I’m hoping it all comes to fruition and that it’s a sign of more good things to come. It’s hard to be cynical right now—we’ve been promised ‘Sunny Ways’ and things are looking brighter.” —Michelle Reddick, Parkdale-High Park
“I’m happy that the country has a clear vision of the type of leadership they want. It is in the hands of our parliament elect now to follow through with a government consistent with the one presented during the campaign. We are a country under Mr. Trudeau and it’s zero hour. I remain hopeful that as our new leader enters his position and begins to move forward, he appreciates that a family’s needs are defined by much more than their household income.” —Mathew LaJoie, University-Rosedale

“This is just a small slice of my expectations for the new government, but I’m really hoping to have the full value of their citizenship restored to my husband, daughter and stepson. A minor thing in the big picture, I know, but personal for our family.” —Jackie Gillard, Ajax

Get our weekly newsletter for highlights of thenewfamily.com and podcast!

'What the Election Results Mean for Families' have 1 comment