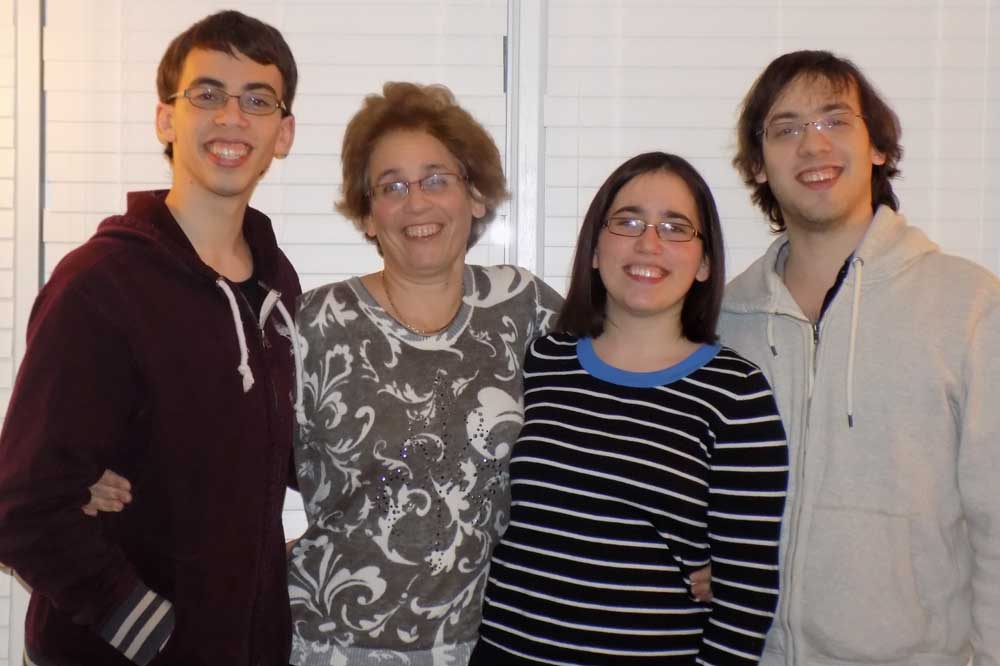 For 18-year-old Sheffi Ben David, there’s no bond stronger than the one he shares with his sister.

I’m the youngest of three kids in my family. I’m eighteen years old, my sister is five years older than me at 23, and my brother just recently turned 26. My siblings were always so good at everything, so when I came to school, I had a legacy to uphold.

My brother was a math star, founded computer science club, and played second seat on the chess team. When I walked into computer science club for the first time and accidentally mentioned my last name, a chorus erupted of “Oh my god, it’s Shalev’s brother!” Everyone expected me to be as good as him, but I wasn’t as invested in the maths as my brother was, and with all the pressure you can probably guess how long I lasted.

I was always closer to my sister, though. In many ways, it feels like my sister raised me as much as my parents did. When I was three, I was jealous of my big sister for learning ballet when I wasn’t (because what young kid doesn’t want to be like his older sister?). She became my teacher for the short while that my dance obsession lasted. Around the same age, I also didn’t know how to pronounce the letter “L,” and my sister sat with me for multiple hours in secret helping me practise so that we could “surprise” my mom when I pronounced the letter correctly in ordinary conversation.

I never learned how to ride a bike until I was eleven. When I originally tried to learn, I fell off, injured myself and never wanted to try again after that. After multiple years, I agreed to try to learn again. But every attempt of my parents to teach me was a nightmare that ended in frustration, arguments and tantrums. It was my sister who managed to teach me how to ride, cycling alongside me and—for everything I messed up—responding with somethign like, “Oh yeah, that’s really tough. I remember falling down all the time when I first learned how to do that.” She treated me more like an equal than my parents ever could, and as a result, she got through to me better. I’d I started the day refusing to try and, eventually, only reluctantly agreeing to get on the bike, by evening I was having so much fun riding my bike that I didn’t want to go back in. That was all because of my sister.

When I was seventeen I fell into a really bad depression. I was having constant mood swings. One day I got into an argument with my mom; she’d been getting mad at me for not doing anything to try to fix the problem. I started crying, my mood being extremely fragile, and my mom immediately changed tune, attempting to console me. Of course, she didn’t succeed, since she was the one who had ben arguing with me in the first place. But when my sister arrived it was completely different. I remember the way she just sat down on my bed, and casually asked, “How’s it going?” as if it were a normal day. I said, between sniffles, that I didn’t even know what I was crying about—that I just was. She laughed, joked about how it had happened to her before, and made a little fun of me, all while almost completely ignoring my drastic changes in mood. She took me seriously while at the same time treated me like an ordinary person. Within minutes I was laughing and forgetting it all happened.

Since then, my sister has moved to the United States for her graduate studies, which means I don’t see her often anymore. But I still talk with her regularly. She’ll call and we’ll have long conversations, catching up on life. It feels like she’s still here, in the room next door, like nothing has changed.

For my entire childhood, none of us ever fought. When I tell my friends this very simple fact, everyone looks at me as if I’m an alien. “What?” they always ask. “You don’t even call each other names? But what if they’re being really annoying?” Well, from what I remember, they never have been. Every pair of siblings I encounter always fights, is always at each other’s throats—but that simply isn’t us.

My mom always had the philosophy that if the kids were fighting, it meant that something wasn’t right in their lives, or that they were upset by something. When I started acting out towards both my parents and my siblings in grade three, my mom moved me schools. She was right to do so, too; the reason I had been acting up, as it turned out, was because I didn’t feel like I fit in at my school and was getting frustrated trying to do so. Although she may not have taught me how to ride a bike or how to swim, she certainly did some things very right.

If I could wish one thing upon my own future kids, it would be to have a dynamic with their siblings like I have with my sister. I don’t know how my mom pulled it off, but you’re damn right that I’ll be trying my hardest to emulate it when my turn comes to be a parent.

This is #1000families post number 178. Do you have a family story of your own to contribute to the 1,000 Families Project? Or do you know a family that might want to do so? Learn more about how the series got started and how to get involved here. You can find all of the #1000families posts here.
We wrote an e-book called 11 Ways to Keep Your Family Weeknights From Spinning Out of Control. To get it for FREE, simply subscribe to our newsletter recapping the best of thenewfamily.com and the podcast!

Sheffi Ben-David is an 18-year old student from Waterloo, Ontario. He is currently in his last year of high school, and will be going to university to study English Literature and Psychology. View all posts by Sheffi Ben David