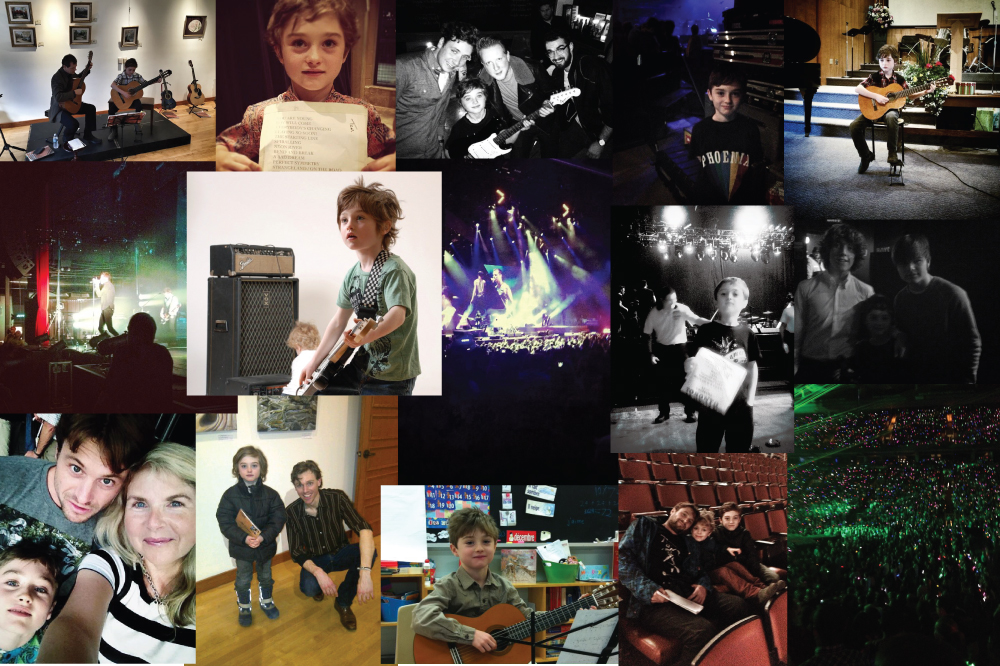 As this mom of two explains, music has provided focus and confidence for their son with ADHD, and given shape to family life at the same time.

The first call came when Kale was in SK. His teacher wanted to see us about some issues that were arising in the classroom. Our son was having a tough time sitting still for any length of time, difficulty following directions from start to finish, and the list goes on. We had our suspicions, and after two years (and a number of specialists) an official diagnosis of ADHD was made.

What to do? So many parents face this question when challenged with an ADHD diagnosis. Each family has to navigate the system and find solutions that work. We tried so many different things before we came up with a plan that worked for our son. It’s a constantly evolving process and we adapt on a regular basis to meet his needs.

One thing clearly began emerge on our journey together: Kale loves music. It became obvious early on that it transported him to a place within himself that brought him much calm and joy.

We figured it would be a good idea to run with the concept that music could be the key to unlocking a whole new world for him. He started classical guitar lessons at age six and we began hauling him to “adult concerts” at age seven. Yes, a suicide boys concert here and a Bon Jovi concert there tends to help a lot as we figured! He might not have been able to sit still in class for any period of time but put a guitar in his hands and he could focus on playing it for long periods of time, with no interruptions. Browsing electric guitars for sale certainly was something we had glanced our eye over, just in case he felt like expanding his guitar playing skills. It was always in the back of our minds.

Admittedly my husband and I love music. At age 40 and 50 we are still actively buying music, going to concerts and as my mom would say “our radio is always on.” When Kale turned seven, Brandon Flowers‘ first solo album “Flamingo” was released and Kale loved it. He was always asking us to play it and this album was on high rotation in the car and at home. When I saw that he was coming to play live in Toronto I pitched the idea to my husband that we should buy three tickets instead of two. It was an all age’s show after all!

I was so nervous at that first concert. Like everything else in our lives we planned out a clear and concise schedule to hopefully create a positive experience. During the opening act I thought we might be done for. He was getting really restless as it was well past his bedtime (he had napped two hours on the car ride down) but oh, oh how exactly was this going to go? Dave and I had agreed beforehand that if Kale tanked we would leave the concert early, no harm and no foul! Then Brandon Flowers hit the stage and it’s impossible for me to explain the look on his face when he made the connection. Music that had inspired and touched him deeply was coming to life, live on stage, right in front of his eyes. During the entire show he was transfixed; nothing got in the way of him enjoying the show and especially not his ADHD!

That concert proved to be complete turning point for us. It’s getting expensive but we make it work (with the help of our village of supporters-you know who you are). In the last five years he has seen M83, Depeche Mode, Skrillex, The Strypes, Bastille, Two Door Cinema Club, Craig Cardiff, Joel Plaskett and the list goes on! Recently we went to see Half Moon Run and couldn’t bring him (19+ show) and we were lonely without him there, he has fully integrated into our concert going life.

His own personal exploration of music has continued as well. Last year Kale won his classical guitar recital at the Kiwanas music festival. My mother-in-law and I sat with bated breath as he walked up to the podium to begin playing. Then it happened again, just like Brandon Flowers this look came over his face and he fell completely into the moment, he was playing his guitar nothing else existed around him.

Kale is also in French immersion and due to living in a small community, after Grade 6 the kids move from one school to another for Grade 7 and 8 immersion (before the big leap to high school). We got so lucky because his new school has a huge music program and after his first week he had joined orchestra to learn how to play the cello! This year he also formed a band with his pals at school called the Crawl Space Giants. Each time I see them play at school assemblies I get a huge lump in my throat because when he has that guitar around his neck I can see that he is fully at peace and able to express himself.

Music has provided a core level of self-esteem for him, and for this my husband and I will be forever grateful. We truly feel that this has had a ripple effect on how he approaches his academic work. Because he is confident, the day-to-day challenges that he faces are a little more manageable as he views them through a self-confident lens!

Whether Kale pursues it as a career or not is a moot point for us. All we know for certain is that he will always have music to lean on, through the good times and bad. Music has set him free and allowed him the opportunity to develop and shine as the beautiful & unique kid that he is.

This is #1000families post number 189. Do you have a family story of your own to contribute to the 1,000 Families Project? Or do you know a family that might want to do so? Learn more about how the series got started and how to get involved here. You can find all of the #1000families posts here.
We wrote an e-book called 11 Ways to Keep Your Family Weeknights From Spinning Out of Control. To get it for FREE, simply subscribe to our newsletter recapping the best of thenewfamily.com and the podcast!

Michelle Ward is a music loving, coffee worshiping social media manager & artist who lives in Meaford, Ontario with her hubs Dave & sons Kale and Desmond. When she isn't juggling Twitter, Instagram & Facebook accounts, you will find her out exploring abandoned local farmhouses in Ontario. You can check out her recent work on the Forgotten Farms website: www.forgottenfarms.com View all posts by Michelle Ward