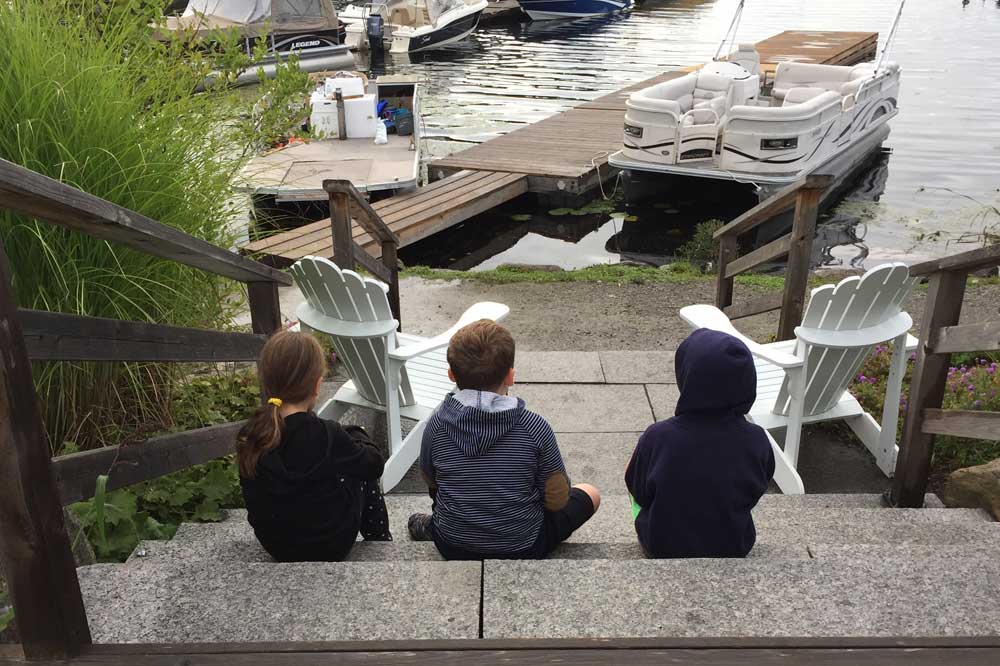 A single mom of two boys wrestles with the complicated prospect of blending families with her boyfriend and his daughter.

Brady Bunch-type families are slowly becoming the new norm, and it turns out, mine is one of them. My boyfriend has a daughter, and with two boys of my own, we are taking our time merging two families into one.

It turns out, it’s not as easy as you would think. You can’t just throw us all into a blender and expect that we’ll come out as a delicious smoothie. A quick look at the statistics paints a bit of a scary picture: roughly 40 percent of marriages in Canada end in divorce. That’s not the end of the world. Things happen; people change and move on. But here’s the rest of the picture: Seventy-five percent of those who divorce re-marry or re-couple. Blended families now represent about one in eight couple-led families, according to 2011 Canadian census data (the first time blended families were even counted). The part that I find daunting: 66 percent of these step-families break up. Gulp.

It’s presented us with quite the task: How do you successfully blend two families, two parenting styles, two homes? How do you beat the odds and make sure you do it right?

According to experts, it’s a big adjustment, one that can take two to five years. There are even specific types of therapy methods that can help blended families succeed.

Since everyone’s situation is different, all I can share is my own personal experience. It all began with scrambled eggs. A few weeks ago, my boyfriend, Scott, and his daughter slept over-something we try to do fairly regularly so the kids have time to bond. The next morning, my boyfriend made us scrambled eggs. He cracked the eggs in the pan, scrambled them, plated them, and then ground fresh pepper on top.

“Ewww!” my five-year-old Josh screamed when he saw his plate. He screwed up his face to show his disgust. “What is this black stuff on top? I’m not eating this!” He shoved his plate away and folded his arms across his chest.

My cheeks burned from embarrassment. I hated it when my kids misbehaved in front of Scott. I wanted them to make a good impression, to be easy, sweet and fun, so that he wouldn’t feel as though my kids would be too difficult for him to handle. (I’m trying to get over this hang-up, but clearly I’m still working on it!)

We looked at one another and I apologized silently with my eyes. I wasn’t sure what to say, but the moment captured it all: in my family, I don’t grind pepper on top of our eggs. We like them plain.

Was this the time to reprimand Josh for being rude? Should I send him to his room? Tell him to apologize? Get his own breakfast? What would Scott do? At this point we weren’t at the stage where Scott was comfortable addressing these situations, so I had to attempt it on my own, and then wonder if I’d done the right thing in his eyes. I was constantly on edge, trying to walk a tightrope between managing my kids how I always had and managing them how I thought Scott might have done it.

Since the egg incident, we’ve had many other similar issues. One night, the kids wreaked havoc before bedtime. My boys accidentally spilled popcorn all over the floor and all the kids began eating it off the carpet and, in the process, staining it. Josh took the vacuum and started swinging it around. The handle flew off the end and put a hole in the wall. At that moment, we were sure that we had to get in touch with reliable carpet cleaning service providers (like B&B Complete Chem-Dry, for example) within our vicinity to remove the stains.

Scott looked at me and I looked at him, paralyzed by the chaos. “Everyone, go upstairs and get ready for bed,” I yelled over the hubbub. “It’s time to calm down.”

“Then can we have popcorn?” my older son Ari asked.

Scott shook his head and mouthed “no popcorn” before covering his face with his hands. I could tell this was all too much for him. It was too much for me, too, but it felt like the pressure was on my shoulders: two of the kids were mine, and they tended to be the ones who made the holes in the walls.

“I’m sorry, no popcorn,” I decided. Scott looked up at me and we managed a half-smile. We’d done it; with guidance and support, we were getting the kids in order.

Another time, on a family vacation together in Florida, Josh refused to sit properly in his car seat.

He continued to sit on half of it or none of it at all. Finally Scott pulled the car over and said calmly, “It’s not safe for me to drive until everyone is sitting properly in their seat.”

Josh sat properly in his seat and the car began to move. I looked at Scott again. He was stone faced. I was half happy and half upset. On the one hand, I finally had someone to help me with the kids. I haven’t had that in a long time. Yet on the other, I was humiliated that it had happened in the first place-that I needed the help. Now who would marry me? If my kids were too much, if I was too ineffective, if I didn’t like pepper on my eggs, who would want to blend families with me now?

Much of this is in my head. “What were you expecting?” Scott asked gently. “This is how it is when you’re parents with young kids.”

Related: Best books to read when you’re going through a separation or divorce.

I’m slowly coming around to the realization that blending families is hard work, but that everything we are going through-together-is normal. With time on our side, we are working on aligning our parenting methods and expectations. I’m being fair but firmer with my boys, the way Scott is with his daughter, and I notice that Scott is slowly getting more comfortable telling my kids, “Ari, don’t climb that,” or “Josh, that’s dangerous.”

We don’t have any immediate plans to marry or merge households, but that’s okay. Perhaps what we require is more time. Another reason could be that we need to think about estate planning by hiring Estate Planning Lawyers In Chandler AZ, or those who might be able to serve us better so that there is no confusion or fight about property distribution in future. Yes! I’m thinking about these things right now because I’m not sure what might happen to us later.