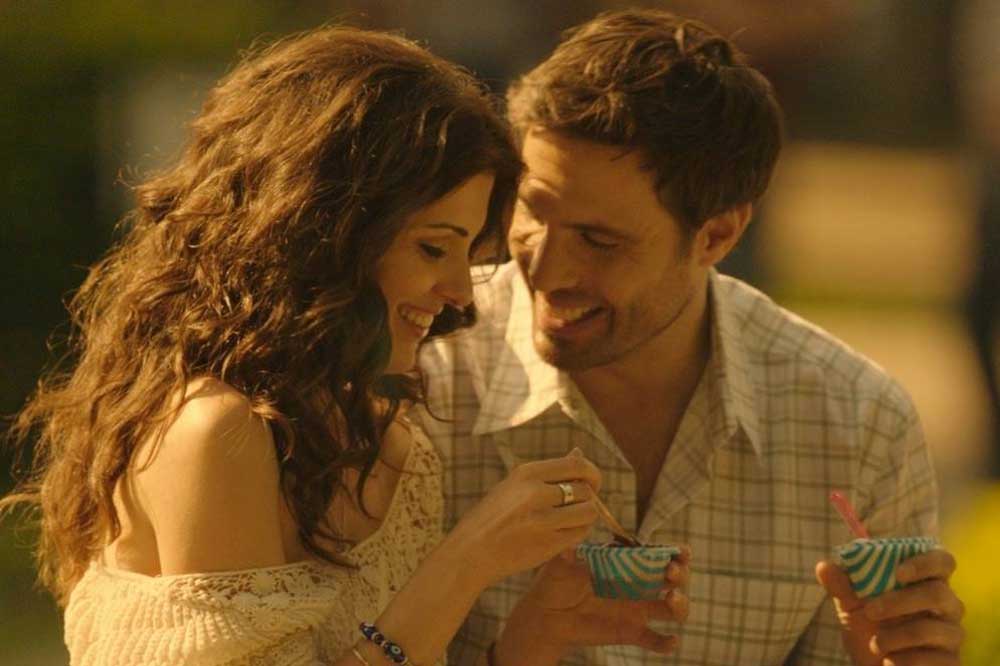 Real-life couple Jeannette Sousa and Ryan K. Scott wrote, produced and star in “A Date with Miss Fortune” a new Canadian indie romantic comedy opening February 5th. With its cross-cultural backdrop based on Ryan’s introduction to Jeannette’s big Portuguese family—as well as some of her superstitious ways—the film has been compared to hits like “My Big Fat Greek Wedding.”

I was at the press screening for the film last week and really recommend putting it top of your list for a Valentine’s Day date night or heartwarming cure for Valentine’s Day blues. I chatted with Jeannette and Ryan about balancing movie making with raising their daughter Kristen.

When did you realize that what was going on in your real lives would make good fodder for a movie?

JS: We started writing the film four years ago, and I was actually pregnant at the time. Kristen is going to be four at the end of the March. A lot of times when you bring two cultures together, you’re a little shocked at some of the things that happen within each culture. And throughout our relationship certain things would happen and we’d say, “We should put that in a script.” Then we looked at each other one day and said, “Let’s make this a film!” One thing led to another and here we are!

How did it go with writing the film while Jeannette was pregnant?

RS: It actually worked out well throughout the writing stage.

JS: That was the least stressful part.

RS: We also had a lot of flexibility with time, so with the two of us writing, if she needed to take some time off, I could pick up where she left and vice versa.

When did the movie go into production and how old was Kristen at the time?

RS: We started pre-production in March 2014, so she would have been two. That’s when things started getting a little bit more intense with our schedules.

JS: She’s been so great through it all. She understands. Joaquim de Almeida—she calls him “Mommy’s movie dad.” She’s really grown-up with it.

RS: Absolutely, she says, “I helped make this film.”

Do you both have parents in the Toronto area?

RS: Jeannette’s are in Mississauga. I grew up in Calgary, and my parents are now living in Kelowna.

JS: We couldn’t have done it without the help of our parents for sure. Even Ryan’s parents flew out for a few weeks while we were filming. And between them and my mom—my mom actually cooked a lot of the Portuguese food on set to make it authentic—so while she did that, they helped out with Kristen.

RS: We have a strong family theme throughout the film and I think that’s because of the strong families we’ve had while doing this.

JS: By the end the cast and crew knew my mom because she’s show up with Portuguese custards for everyone.

As your two sets of parents came together to help you, did they get to know each other quite well?

RS: Well, they knew each other quite well beforehand but probably even more so spending that time together. They rallied behind us. Yes, I think it’s fair to say they got closer.

Those cultural tensions that inspired the movie, have they been explored and ironed out over time?

JS: After all these years it’s become somewhat of a norm, but every so often I’ll do something and I’ll get a little eyebrow raise from him. But for the most part…

RS: I’m used to it now. There’s not too much that surprising me anymore!

With Valentine’s Day around the corner, what is your hope for people discovering this movie over the coming weeks?

RS: We open Friday (February 5th) and we’re in Cineplex Vaughan, Winston-Churchill and Yonge and Dundas, and we have done really well with pre-sales, so knock on wood…

RS: Yeah, we’re really hoping that Cineplex takes us nation-wide for Valentine’s Day. We don’t have a lot of advertising money so we’re really relying on people to tell each other and it just worked out nicely that we have a week of promotion before Valentine’s Day to get people talking about it and give us that push to go across the country.

And it’s an all-Canadian production?

JS: Which we’re really proud of.

RS: Yeah, we’re super happy about it. And we wanted to make a film that had a strong commercial sensibility. When we go into a project, we want to make sure that we can appeal to a broader audience. Sometimes if films are too niche, nobody sees them… We make movies for other people, to entertain them to make them laugh.

JS: So many times (Canadian) films get made and shelved. Our hope is for people to go to the film and say, “Wow, that was 97 minutes that I really enjoyed and I’m so glad we went.”

How does it feel to leave the film as a legacy for Kristen?

JS: I’m going to be honest, because we wore so many hats on this one, it was a lot. And sometimes it was overwhelming. There were points where we wondered, “Can we do this?” And all it took was looking at her and saying, I’m going to do this and I’m going to do it for you, kiddo. I’m going to show you that if you reach for the stars, magical things can happen. I thought, we have to lead by example and the film is definitely dedicated to her.”

You can read Ryan’s contribution to the 1,000 Families Project here.

'Q&A: “A Date with Miss Fortune” Stars on Balancing Movie Making with Family Life' has no comments