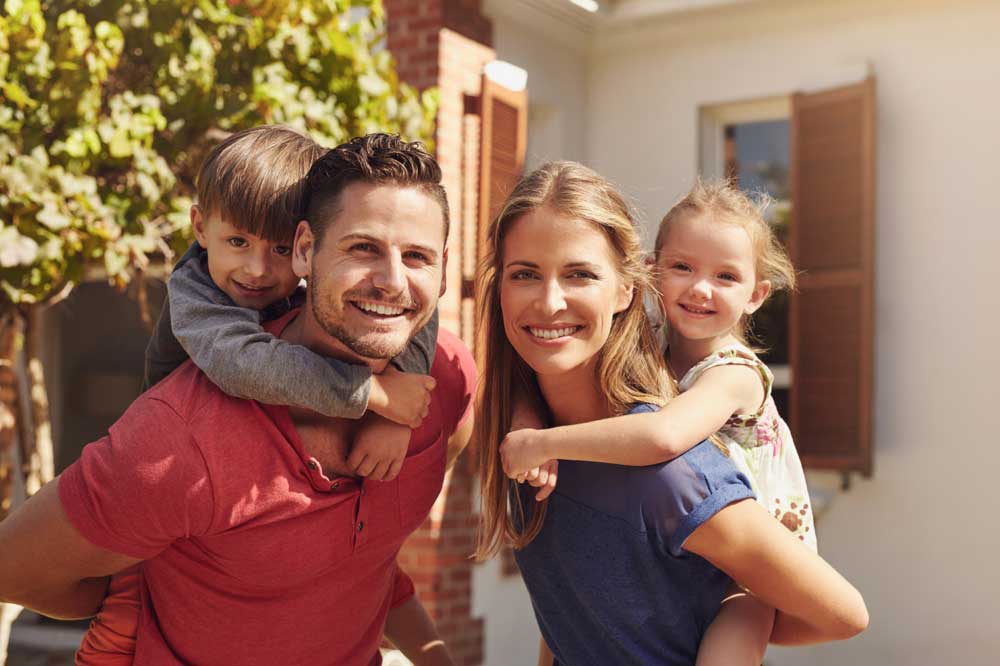 For this mom of two, family includes both those in the here and now and the dearly departed.

When my family and I returned to my hometown three years ago and moved into the house where my grandmother grew up, part of the appeal was in raising my children in a home steeped in our family history. Little did I know we’d get all of that and more.

My husband and I first met when we were at Queen’s together, but since graduating we’d lived first in Toronto and then in Manhattan, a far cry from tiny Orangeville, Ontario where I grew up. When we were new young professionals eager to make our way in the world, we relished our urban lifestyle and upward mobility. New York City is a pretty exciting place when you’ve got nowhere to be but work, or the gym or the endless array of clubs and restaurants where we’d meet our friends most nights.

But when the novelty of that could no longer hold sway over our desire to become parents, joining the ranks of our friends who were getting pregnant and moving to the outer boroughs pair by pair, our take on things began to change. Soon we were poring over school ranking data and wondering where in our city we could raise a child. We made due in our little apartment when Avery came along, overjoyed to be parents if a little cramped. But the distance from our hometowns began to take a toll. I longed for Sunday dinners with my parents and siblings back home in Ontario, and would have given anything for a grandma nearby to babysit from time to time.

Three years and a couple of apartments later, our wallets much lighter from paying for Avery’s preschool, we nonetheless added to our family when her little brother, Henry, came along. Around this time, though, we got word that my grandmother had finally moved to a care home after nearly 93 years in the house where she grew up, and where her mother—my great grandmother—had also been raised along with her seven siblings. She’d never wanted to live in one of “those dreadful old folks’ homes,” so I suppose it’s no surprise that a couple of weeks later, grandma succumbed to pneumonia following a broken hip as so many others have before her.

Home for the funeral with my young family in tow, I learned that she’d left the house to me. Something about losing grandma, and about seeing our children in the arms of their grandparents during the visit, caused a shift in us. Why couldn’t we just quit our jobs and move back? We’d find new jobs. And living mortgage free would give us the freedom to take our time with the hunt for work.

A couple of hectic months later, we were back for good with all our worldly belongings. Avery loved exploring her new home and as soon as Henry could crawl then toddle he was doing the same. Those Sunday dinners I’d yearned for were finally a reality and the kids were thriving surrounded by family.

Now, my grandmother had always said that this old house must be haunted. “How can it not be,” she’d say with a wink, “it’s nearly 130 years old?” It wasn’t until I heard Avery talk about “the other grandma” she’d spoken to in Henry’s upstairs nursery that I began to wonder if there could be something to my grandmother’s claims that Aunt Mabel, a doting, nanny-like figure in her own upbringing, had stuck around to look after everyone all these generations later. Still, I dismissed it. I mean, I’m not the kind of person to believe in woo-woo stuff like that.

But the next week I caught a glimpse of a figure in long skirts moving along a hallway upstairs. I blinked and shook my head. The sleep deprivation surely must be getting to me, I thought. The next time I spotted the lady in a long dress and apron, though, she looked at me and smiled. Something about her eyes seemed so familiar, but she was gone again in an instant. I rounded the corner into Avery’s room where she immediately proceeded to say, “Other grandma plays ring-around-the-rosey with me.”

When I first mentioned all of this to my husband, he looked at me like I had 10 heads. But not a week later he came to me, wide-eyed, and said that he, too, had seen the lady in long skirts, moving out of Henry’s nursery, smiling and disappearing at the end of the hallway. Later that night we pulled one of grandma’s dusty old photo albums off the shelf in the study and flipped through until we found a picture of my great grandmother and all her siblings. Sure enough, “other grandma” was among them. The smile and twinkly eyes were unmistakable. It was great, great Aunt Mabel.

I know it sounds crazy to say, but we’ve become accustomed to Aunt Mabel’s presence. Henry, now two, has gotten used to having her around as well. If I catch her leaving his room he’ll often say something like “Gamma gone.” Avery runs upstairs to see her after school, reporting on the day’s events. In fact, when I hear Avery singing “ring around the rosey” I know I’m usually good to get a load of laundry on while the kids are occupied. I guess you could say that living with a ghost is like being in a multi-generational family!

We moved back to Ontario to get in touch with our roots. For the family dinners and for those times when my parents easily drop by a soccer game or piano recital. Little could we have known that our family would take a shape it has, with Aunt Mabel as part of it. I really hope she’s with us forever.

This is #1000families post number 202, a special edition for April 1st. Happy April Fools’ Day, everyone! Do you have a family story of your own to contribute to the 1,000 Families Project? Or do you know a family that might want to do so? Learn more about how the series got started and how to get involved here. You can find all of the #1000families posts here.