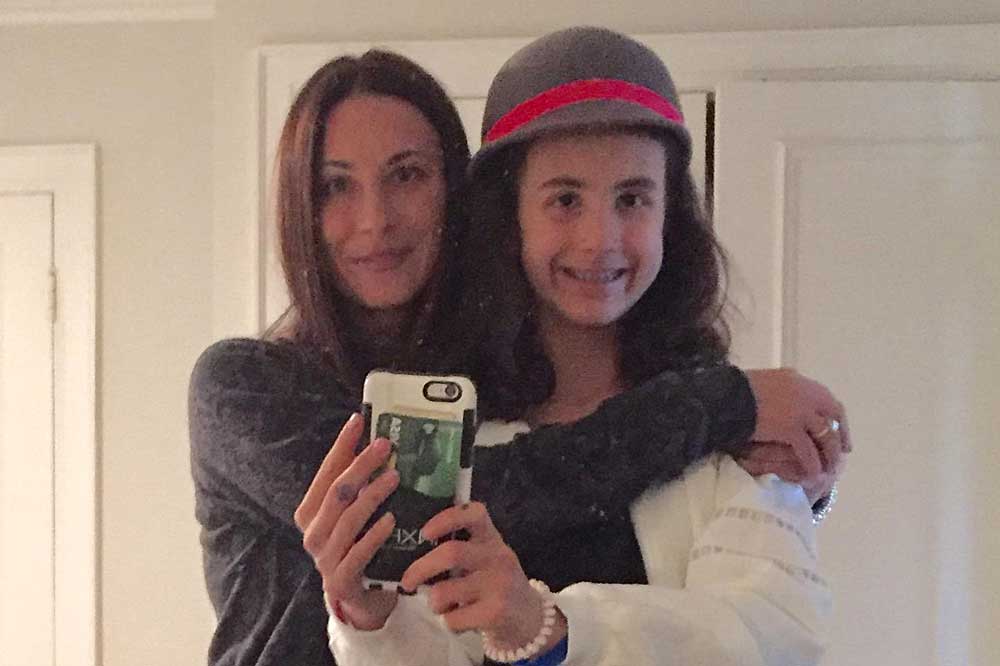 Author Rebecca Eckler shares what worries her most as a divorced mom with primary residential custody of her daughter-the possibility that her child will announce one day that she’d rather live with her dad.

The bond I have with my almost 13-year-old daughter amazes most people.
Perhaps we’re as close as we are because, for many years, it was just me and her. For years after she was born, I carried her around like a kangaroo. When she was young, her father and I realized our relationship just wasn’t working out. We contacted a family lawyer and had a very easy divorce process. Because of this, and him moving away, I spent a lot more time with her than he did. Today we share some of the similarities of twins. We often finish each other’s sentences. We sit the same way when we watch television. We hold hands. I know exactly what she’s thinking at certain times, just as she knows what I’m thinking. If we’re eating, I’ll pass her a drink at the exact same time as she opens her mouth to ask me to do so.

Yes, I am her parent, but we also enjoy each other’s company-like best friends. We can talk for hours. Or we can sit together in comfortable silence, like an old married couple. Often, we will go on mother-daughter trips, sleep in the same bed and spoon.

So far, she tells me everything, including but not limited to gossip about her friends, who’s getting along with who, and, well, every single preteen worry.
Amazingly, we’ve never had a fight, although I am well aware that this could and probably will change as she enters those teenage years. My biggest fear, however, is not that I’m going to lose her to teenage-hood, but that I’m going to lose her physically to another city.

You see, her father lives in Calgary and we live in Toronto. Her father is an amazing person, who treats her like a princess and is the type of man, who, when she’s at overnight camp, will fly four hours and then drive three more just to see her on Visitors’ Day.

He comes to town for almost all her performances, and if he can’t make it, he sends a beautiful bouquet of flowers. When she was having bullying issues at school, and I couldn’t handle it, he flew in for one day to meet the principal. He’s a wonderful father, who takes great interest in his daughter’s achievements. He introduced her to her love of ski racing, dude ranches and classic rock. They text almost every day and have inside jokes.

Recently, I’ve heard several stories about families where the child or children decided which parent they wanted to live with. One mother had a son who, at the early age of nine, demanded that he live with his father for months on end. This wasn’t a case where Dad was more fun than Mom. The son just really wanted to be with Dad, but both are good, engaged parents. It’s not that this mother gave in to her son’s demands either; it’s more that she felt she had to agree because she wanted her son to be happy. So her child moved in with his father.

Her heart was broken, understandably, but at the end of the day, she still put her son and his happiness first. They live close so she still sees him; he sleeps over at her house a couple times per week, but, mostly, he stays with his dad.

As a mother, how could your heart not break for this mom, while at the same time give her kudos for putting her son’s happiness before her own?

Again, from both sides, I’m guessing it breaks Dad’s heart that his daughter chose to live with Mom, just as Mom’s heart would break over the thought that her son doesn’t want to live with her. But we can’t look at this as “choosing” sides. We just can’t. The children are happy with this arrangement, so kudos, too, to the parents for making their children’s happiness top priority, especially when it’s not always like this. It can be very difficult for both parties, and they can feel as if they are being pushed to one side or shunned. It could end in a messy divorce, with each side trying to use their lawyers to one-up the other. However, it shouldn’t be the case, especially if you are putting your children and their needs first with the help of a law firm similar to this divorce lawyer Harrisburg PA, or a lawyer in your local area.

Now, I know a lot of you are probably judging. “You can’t let your kids dictate where they live! You are still their parents! It’s not up to them!” Or, “The divorce papers say I have primary custody and I’m sticking to the agreement or going to court!” Or, “I’d never let this happen!”

But, but, but…I have an agreement too. Rowan lives with me in Toronto and, thus, I have primary custody. When I hear a stories like these-stories I’m hearing more and more often-I often wonder, “What would I do in that situation?”

All these parents are good people and fabulous, caring parents. It’s just that the kids prefer, for whatever reason, to live with one or the other. Maybe they simply relate to the parent of the same gender, in some cases, or want more time with the parent they’ve typically seen less of, in others.

And if your child is intelligent and can argue his or her case for switching primary homes (which these children have done, and quite eloquently at that) what are we to do? Especially if both parents are good parents and trust each other raising their children?

So, yeah, it does scare the crap out of me that one day I’ll wake up, no matter how close my daughter and I are, and hear her tell me why she may want to move to Calgary for a year, for example, to live with her father.

I think, “Okay, breathe. She’s too close to you to ever want to leave you, aside from heading off to overnight camp, college or university. Her friends are all here. She loves her school. Her grandparents are here, as is her brother. I’m safe.”

But hey, I’ve always said that children, in some ways, are a crap shoot, so maybe I am no safer than any of these other parents.

And my daughter is also close to her father, albeit in a different way. She has friends in Calgary, as she spends weekends and half of the summer there. And, of course, Calgary has good schools, too. As well, her other set of amazing grandparents are there. So, yes, this could happen.

My daughter, one day, may want to try out living in Calgary, because as close as she is to me, she’s also up for any and all adventures. And if she did ask, and after going through all the pros and cons of this imaginary move I’ve conjured up in my head, she still wanted to move to Calgary, I would be heartbroken. The kind of heart break that would leave me under the covers in bed for months, popping sleeping pills and just trying to shut my brain off.

But my happiness has never come before hers. So, honestly, as heartbreaking as it would be for me, no matter what “papers” are in place and signed, I do feel I would have to let her go.

I can honestly say that I wouldn’t worry about her dad’s parenting skills because I know what type of dad he is-a great one! I know there is Skype and texts and FaceTime, which aren’t, of course, the same as holding hands. Or kissing her on her cheeks. And I know she’d never FORGET about me. But still…

My fear about this, which has only come up in the last few months, stems partly from the fact that the world has changed and 50/50 custody is now much more the norm. Children are savvy about that, and they know what they want. In previous generations, it was just accepted that Mommy got custody, and Dad would see them Wednesday nights and every other weekend. Kids seemed to accept this.

In this modern world, anything goes when it comes to the make up of families. Situations where children have a say in where they want to be, whether hurtful to the parents or not, are going to become more and more, I think.

On my end, this discussion has not happened. And maybe it never will. But it’s hard not to think about sometimes, however painful it may be. So, what’s a divorced mother or father to do? Enjoy every damn second with your children. That’s the best I have to offer. With my daughter, I most certainly have.

Blending Families: The Tricky Parts of Making Two Families into One

Rebecca Eckler is an author and journalist. She's published nine books, including Knocked Up!, How to Raise a Boyfriend and her most recent, The Mommy Mob. View all posts by Rebecca Eckler

'A Divorced Mom’s
Greatest Fear' has no comments