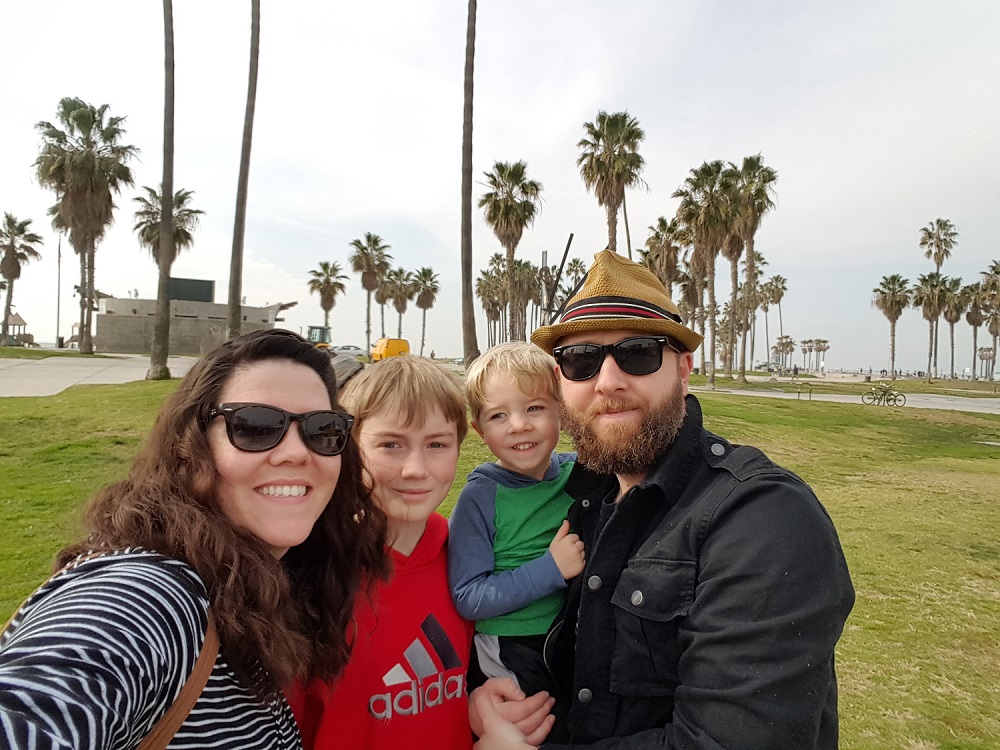 Her conservative religious upbringing changed dramatically when Kelly Bauer’s parents divorced and her mom came out. Now a mom and step-mom, Kelly’s own journey to parenthood has included surprising turns—some beautiful, some challenging.

My family experience didn’t start out as atypical. Quite the opposite, actually. I grew up in Texas, the daughter of a conservative, religious mother and father. However, things went pretty sideways when, at eight years old, my parents divorced and my mother came out. Now, my mother is my hero, but I’d be lying if I said that the experience wasn’t a difficult one. Having been raised in a very conservative sect of Christianity, my entire world and belief system was thrown into question by having a gay parent. Add to it that I did not have a neutral support network or therapist and well, I flailed for a while. Thankfully, I found my footing and shook free from the hateful doctrine which I had been raised to believe. Unfortunately, among the casualties of this battle of beliefs, was my relationship with my father.

My mother is now happily married to a brilliant woman, who I lovingly refer to as my Bonus Mom. She really is a bonus, and seeing my mother living true to herself, with a partner who balances her and fits her so perfectly has taught me much about love and life. They are wise women, these mothers of mine, and as any parent might hope to do, they walk the path ahead while I, still very like a little girl, trail along, placing my feet inside their prints.

My husband and I have built our own little atypical family, in part by the nature of our circumstances, and partially by shared experiences. When I met my husband, he was already a father. However, my stepson, Caiden, then only five years old, was far from being a red flag to my interest in his father. Their story—the story from before me—is not mine to share, but I will say that my husband’s experience as a single father told me more about his character than I would ever need to know. He is an excellent man.

We began dating, and with the relationship growing more serious, I eventually moved in and began to tiptoe into the role of step-mother. I was terrible at it. I was young and, frankly, inexperienced with children. I am an only child and had no experience with kids. And at just 24 years old I found that the transition from independent, young, city girl to responsible, suburban step-mom was not an easy one. I made it, though, and managed to come out the other side still dating my now-husband and with a step-son who actually loves me!

Mothering began to feel more natural, and as it did, I felt more confident in my ability to guide and love this sweet kid. I often refer to him as “The Boy Who Made Me Real” because of the way he threw back the curtains on a piece of myself that I never knew existed. He uncovered the mother in me. The more confident I became in parenting, the more I enjoyed it. And the more I enjoyed it, the more I wanted… well, more! So in 2012, we welcomed our youngest son, Silas.

Silas’ birth is one of the greatest moments of my life, but also marks the beginning of my battle with Postpartum Anxiety and Obsessive Compulsive Disorder (OCD). From the very moment that Silas was placed into my arms, I was gripped with fear. Playing in my head like a personalized horror film was a constant reel of all the awful things that could happen to him—all the ways I could lose him. I developed ticks. There were little things that my brain told me I had to do or say or else bad things would happen to my baby. It took two years of denial and two years of encouragement from my husband before I was able to find help, which I did through PostpartumProgress.org.

Though I had suffered in silence for a long time, my recovery was comparatively quick thanks to an excellent therapist. So swift was my healing that, in 2015, my husband and I announced that we were expecting again and, in September of that year, we were given the delightful news that I was carrying a girl. Our first daughter. In my head, I began to call her Clara.

Two days after our anatomy scan, our doctor called. The scan had shown that the ventricles in Clara’s head were enlarged and so we needed to schedule a Level II ultrasound with a specialist. One week later, we would enter the office of a high-risk OB and discover that our daughter, our sweet Clara girl, had spina bifida myelomeningocele with Arnold Chiari II malformation and severe hydrocephaly. So severe was her condition that she would be unable to survive outside my womb. Our “choices” consisted of attempting to bring her to term and deliver her, only to watch her die, or to schedule a surgical abortion and say goodbye then, at 22 weeks gestation. We chose the latter.

My husband and I are decidedly liberal and have always identified as pro-choice. However, being married and procreating on purpose, abortion is never a decision we thought we would have to make. It was eye-opening to say the least. I used to say something along the lines of “I believe women should be able to choose, but I would never choose abortion.” In hindsight, it’s probably one of the most arrogant things I’ve ever said, as it implies that I would be able to endure something that another woman could not. It was foolishness, spoken simply from a lack of understanding and experience.

I’ll never say that this happened for a reason. I’ll never say that things played out for the better. “Better” would be me holding my daughter, while my husband and sons snuggle nearby. However, I won’t deny that we have grown tremendously from our experience, as individuals, and as a family. Losing Clara has given my sons a different lens through which to see the world. Though I wish they’d never experienced our shared pain, I know that they will be more compassionate for having been through it. I hope that, having seen the importance of choice, my feminist sons will grow to be advocates for the reproductive rights of women. My sons have seen their parents grieve an unthinkable loss, and then watched us turn pain into progress, and anguish into advocacy. They have watched us come alive again.

When I look back at these experiences, and at the choices we have made, I realize that I am still just a little girl, putting my feet down in the prints laid by my mothers. Luckily for me, they’ve laid a wise and loving path.

This is #1000families post number 208. Do you have a family story of your own to contribute to the 1,000 Families Project? Or do you know a family that might want to do so? Learn more about how the series got started and how to get involved here. You can find all of the #1000families posts here.
We wrote an e-book called 11 Ways to Keep Your Family Weeknights From Spinning Out of Control. To get it for FREE, simply subscribe to our newsletter recapping the best of thenewfamily.com and the podcast!

Kelly Bauer is a mother, wife, writer and storyteller. On her blog, Motherhood Misfit, she discusses motherhood, her journey through Postpartum Anxiety/OCD and her experience with grief, after losing her unborn daughter, Clara, to Spina Bifida, 22 weeks into pregnancy. Aside from on the blog, she can be found pretending to know how Twitter works, @kbauerwrites View all posts by Kelly Bauer