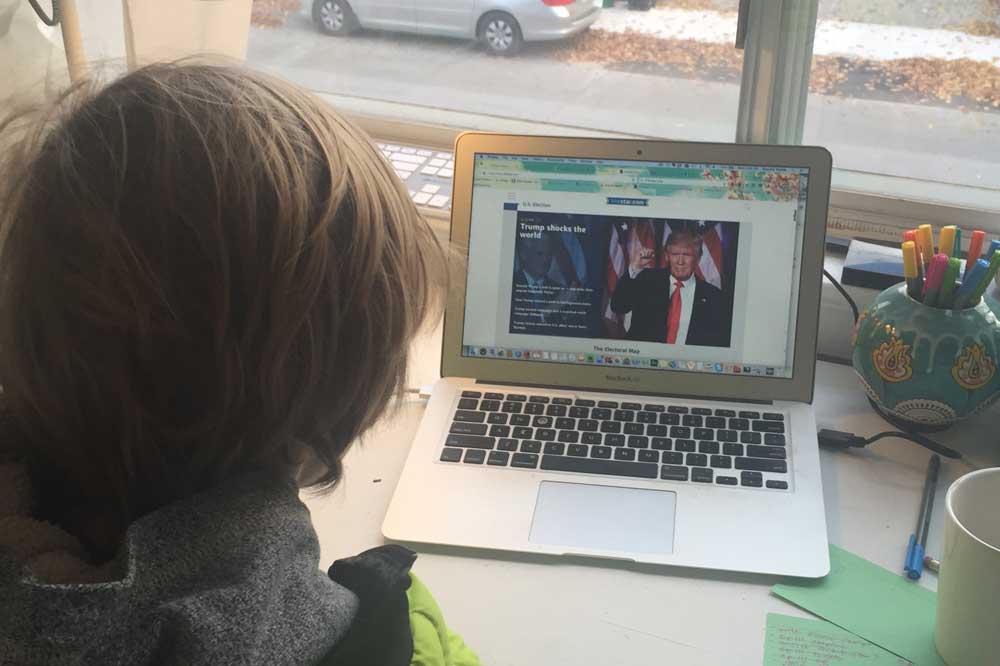 What do we tell the children about Trump’s presidential victory? About how the unthinkable happened? About how to square our own values of tolerance, acceptance and respect with the man who will soon hold the highest office in the land?

We’ve woken up in a world today that few of us understand, and I’m not sure how to explain this to my kids.

Like so many others, I haven’t held back in my conversations with the kids about Donald Trump. No, I’ve pointed to him as an example of what not to do. Of how not to comport oneself in public, of how not to treat women, of how to not to treat people based on their skin colour, their gender, their religion.

I have two sons. I think my friends who have daughters are even more distressed this morning about how to handle the conversation around the Trump win. A man who has bragged about sexually assaulting women is now the leader of the free world? Trump’s going to be the role model for the men their daughters will encounter as they come of age? Surely not.

But whether you have boys or girls, the election results pose one heck of a challenge for us as parents.

Because my kids are nine and 13 and—the older in particular—quite interested in history, we’ve had in-depth discussions about the conditions that led Trump to become the Republican presidential nominee. About how a candidate can pull the wool over people’s eyes by scapegoating cultural groups he frames as “others”—others who, they suggest, have taken some of what is rightfully yours.

As many scholars and political commentators have done, I’ve compared Trump’s rise to the way that Hitler managed to come to power. About how Hitler harnessed anger and scarcity that in part stemmed from economic insecurity—though the state of the economy in the U.S. today has little in common with how Germany was faring under strict war reparations at the time—and used it to gobble power and commit heinous crimes. With 2008’s economic crisis now eight years behind us, it’s difficult to pin the blame on the economy. No, sadly, it seems the U.S. of today is just particularly fertile ground for bigotry, misogyny and racism.

But never mind the “why” and “how” for now. It’s too much to bite off in this blog post. The most pressing fact for me today is that the guy I compared the guy to Hitler has now managed to win.

How do I frame this for my two children?

A couple of experts I emailed this morning are also struggling to come up with answers.

“I’m too upset to think,” wrote Dr. Michele Borba, author of Unselfie: Why Empathetic Kids Succeed in our All-About-Me World. Still, the California-based psychologist did manage to make this very good point. At least we have a democracy, however shaken it may feel right now. “We may have different views but when we go into that ballot box we can make a choice. Millions of people worldwide don’t have that privilege.”

Parenting expert Alyson Schafer made a similar point. “I guess we can offer calm comfort that we don’t know the future—we can only watch and see how he acts and decide on his leadership then. That we are concerned but we also know that democracy was how he got into power.”

And it’s also good to remember that no one has as much influence on our children as we do. It’s how we live and exemplify our values that matters most, and at home we can show our kids how not to be name-calling bigots, she said.

So when I reflect on that extra distress my friends with daughters are experiencing, by no means do I suggest that I’m even remotely off the hook as the parent of two boys. I’ll just have to work extra hard, along with their dad, to be clear about what is and isn’t right in how girls and women are treated by them and the world at large.

I’ll be making the same clear about how we welcome immigrants from all ethnic and religious backgrounds. About how we leave it up to others to decide who they love and marry. About how we care for those who don’t have what they need to get by. About how we don’t turn our backs on people in need, whether they’re being bullied on the playground or waiting in refugee camps for a warm welcome to a new country.

On the walk to school this morning, I chatted briefly about it with my nine-year-old son.

I’d read some advice in this piece that stresses the importance of assuring our kids that we will keep them safe.

You know what my son had to say? This:

Me: *sighs* *tries to think of something*

Perhaps I should have come up with something related to Trump caring about his country, even if we don’t agree with his version of caring? I honestly didn’t know how to respond to that.

So I shifted the conversation a little to gratitude that we live in Canada, that we have a good Prime Minister who cares about people.

As for our nearest and dearest neighbours? “Well, sometimes people you care about make bad decisions,” I said.

“And you have to just keep loving them through it.”

'The Trump Win: I Don’t Know How to Parent Through This' have 1 comment