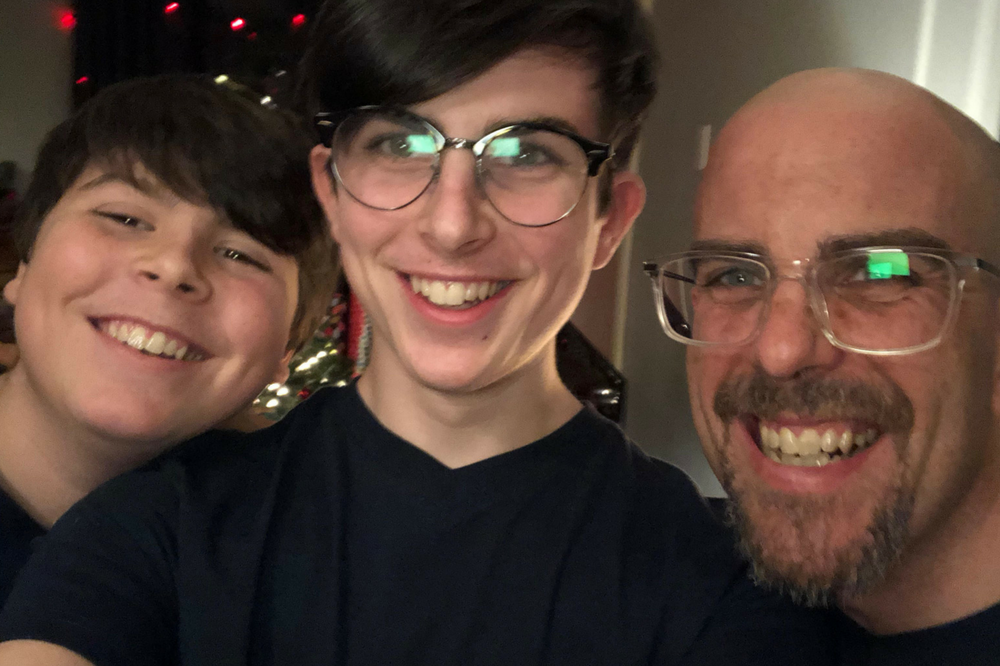 Long after marrying his university sweetheart, a single dad writes on remaking family life following separation and divorce, and the journey to realizing he and his sons made a real family of three – no missing pieces.

I have never met anyone like my ex-wife, before or since. We got together in university and were a bit of a super couple, if such things exist outside of Hollywood and soap operas. We had a lot of the same values and had a very exciting relationship that lots of our friends called “movie love.” We married at 23 and both changed our surnames, and our wedding even inspired friends to get married who swore they never would.

We had our first kid at 25 – which is practically teenage-parenthood for two professionals – and our second arrived just before my 28th birthday. We lived in major cities and small towns in the U.S. and Canada and were both fairly involved in the early years of our children’s lives. We are feminists and yet division of labour in the home and how we managed that with our work lives was often a struggle. But between her big job and my well-paying private practice that allowed me to work part time, we managed fairly well.

When we were finally both appropriately employed, we seemingly had it all – healthy kids, satisfying careers, active social lives, the big Victorian house with the in-ground pool in a small university town. We had it all. Everything looked good. We seemed to make decisions together as well. For instance, we both decided to rent out one section of our house to make some more money. We planned to talk to a letting agent as well to help us find a tenant. We were going to find tenants on our own when a friend who lives in Manchester pointed to the fact that he rented out his property quickly with the help of professionals like the Abode agents in Manchester. So, we thought that we might as well consider taking the help. Anyway, even if we were making decisions and doing things together, our marriage was not happy.

After 18 years together, we called it quits and had to figure out how to start over as single parents in our late-30s. This happened not long after moving to a new city where we didn’t have a huge network to fall back on. It was rough, especially when we were shifting with all our belongings. Searching for a moving company was not easy as it seems to be now when individuals can simply search for virginia beach moving company on the Internet and get hold of a reputed firm.

Anyway, a few weeks after we split, we had a bat mitzvah to go to, back in the small university town where we spent some of the best and worst years of our marriage. I took our sons, alone, and I remember looking out at the vineyard where the out-of-towners’ dinner was being held, and all I could see were happy families. A kingdom where I was no longer a citizen. I tried to be upbeat and think, “Well, I had a good run. Not everyone gets to have what I just gave up.” And when I returned back to our new home city I began the series of firsts as a single dad: first new apartment, first day of school, first Halloween, first year of Christmas planning. It is tough getting a divorce, you need to find legal representation that will help a family through this difficult time, whether it be a lawyer like Jennifer Croker or a lawyer within your local area, you need to feel content with the process.

I had been talking with my ex-sister-in-law about Christmas and had said that there was no way I could do Christmas like my ex’s family did it, so I wasn’t even going to try. Christmas in my family of origin was usually a difficult affair, but Christmases at my ex’s were the most magical weeks I had ever seen. And besides-my ex had the house, the car and the extended family with my only nephews who were close in age to my kids, and she could totally do it way better than me. Why put the kids through sharing Christmas?

My ex-sister-in-law promptly asked me to give my head a shake and get back into therapy. Which I did. While my interactions with my ex had become acrimonious, my interactions with my former in-laws were still quite close. After all, I had been a part of the family for nearly two decades. The deal we struck was that I would host my ex-brother-in-law and nephews and sons for a Christmas brunch, after they had “real Christmas morning” at my ex’s.

And then, two days before Christmas, I met the most wonderful French Canadian man. He was kind and charming and funny, and his birthday was actually on Christmas Day. So after my kids and in-laws left our holiday brunch, I went to his apartment to celebrate his birthday and cope with my first Christmas morning in many years where I woke up alone, without kids scurrying about. He was so kind to me and my broken heart and we began dating exclusively relatively quickly.

Within a few months, news had circulated about my new relationship. When my ex found out, there were a lot of fireworks. On the same weekend I was running a half marathon, I got an e-mail saying that I had 48 hours to inform the kids of my new relationship, otherwise she would do the honours. So, on a Saturday afternoon over ice cream, I told my sons about mon nouveau chum (he was French Canadian after all, and who in their late 30s has a “boyfriend”? In French, it is somehow more cool).

My kids reacted as expected. My youngest didn’t bat an eyelash, even though the boys had heard from their mother that I started dating someone – they just didn’t know it was a man. After the relief of finding out I wasn’t dating one of his teachers, he wanted to know all about how we met, when he would meet him, and what he was like. My eldest, 13 at this point, was his typical self: reserved, not asking a lot of questions, and needing time to digest, but clearly wanting to be happy for me because I said that I was happy. It was one of those moments where one realizes that, even if you feel like you may have wrecked everything, you can see some evidence that you have done some things right.

The following year, we moved in together, the four of us. The summer after that, we had an invitation to a bar mitzvah back in that small university town where the boys and I used to live. At the same vineyard for the out-of-towners’ dinner, I looked out on the crowd and realized that I had re-gained my citizenship to the kingdom in which I so badly wanted to be a part. I had spent the previous years not really thinking about whether or not we were a family – I was just being. And then it hit me that we were a unit of four.

That fall, while in the process of getting ready to buy a house together – which was really going to seal the deal in my mind – my partner and I discovered that, while we had never argued, we had a couple of significant differences that may not work out over time. We decided to part ways. We were all very sad about this, and certainly our parting had nothing to do with love. Talking about it a few months later, we both felt as though we got dumped, which is strange and sad, but ultimately the decision we made was for the best. And so that fall I was back to being a single father, now of two teenagers and in my early 40s, and was going to start over again.

What I hadn’t planned on was Christmas. This was my year to have the boys for Christmas, and at their other house they now had two step-siblings and a baby half-brother, in addition to their cousins and aunt and uncle to celebrate with. I couldn’t imagine what I was going to do to compete with all that family and magic, and one of the first questions from my ex when she learned of my break-up was about whether I was interested in re-considering having the kids for Christmas because my “situation is now changed.”

I decided that I was going to give Christmas a go. And so, at the end of November – with my partner’s things all moved out of our little house – I immediately started decking the halls and planning our holidays with the boys. Since they were teenagers at that point, they got some votes on what traditions we kept and what we new things we would do as a threesome to celebrate some time off from work and school. We kept the Christmas cookies and matching pajamas, but dispensed with the “big meat meal that takes too much chewing” (read: turkey, goose or ham). And we added some new things.

It was the best Christmas I’d ever had. We played games and opened presents on Christmas Eve between courses of hors d’oeuvres and tourtière. We shared music that they like now and the music I listened to when I was their age and had a dance party. We played video games and stayed up super late. Should have picked up one of those posters for gamers as another Christmas present. We slept in on Christmas Day, and eventually went out to a diner for dinner before going to the movies. It was special and magical and full of love. The best gift of the season was that I realized, no matter what happens – how my family will expand and contract over the years with my future partners and my sons’ future partners – the three of us are a real family. No missing pieces. Not something cobbled together out of necessity, but a real family after all. It took me a while – too long, really – to figure out that while I had been hanging my hat on the idea that a family is two adults and some children, that isn’t true. It was a lie I told myself in my grief that I don’t have to believe anymore.

This is #1000families post number 231. Do you have a family story of your own to contribute to the 1,000 Families Project? Or do you know a family that might want to do so? Learn more about how the series got started and how to get involved here. You can find all of the #1000families posts here.

Matthew Rippeyoung is a single dad of teenage sons, living in Ottawa where he works as a psychologist. He strives to clean up more messes than he makes, and succeeds, most days. He believes that everything that we do in life that matters is really about our relationships. View all posts by Matthew Rippeyoung